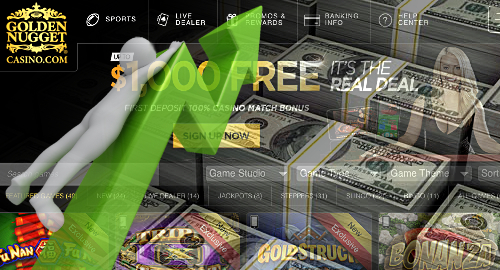 Figures released Thursday by the New Jersey Division of Gaming Enforcement show the state’s licensed online gambling operators generated revenue of $45.2m in October, a 69% improvement over the same month last year and $4.1m higher than the state’s previous monthly record set in both August and September of this year.

As usual, the market-leading Golden Nugget online casino was also in record-setting mode with a monthly total of $16.62m, around $1m higher than its previous best showing. The Nugget’s online casino also set an entirely different record by beating the property’s brick-and-mortar gaming revenue, which was down 9.6% to $14.75m.

Resorts Digital Gaming, under whose banner huddles both DraftKings and The Stars Group’s FoxBet brand, joined the eight-figure club in October with revenue of $10.33m – a whopping 196.2% year-on-year improvement – of which $559k came via PokerStars’ poker operations.

The Borgata’s family of sites, which includes GVC Holdings’ PartyPoker brand and the BetMGM joint venture, also had a solid month, with revenue rising 77.7% year-on-year to a property record $7.75m ($390k from poker). Caesars Interactive Entertainment ranked fourth with $4.26m ($691k from poker), up a comparatively disappointing 9% from October 2018.

As for the rest of the casino-only sites, the Tropicana nudged up 4.8% to $3.88m while the Hard Rock Atlantic City sites – which now include Bet365 and Unibet – shot up 78% to $1.81m. The Ocean Casino Resort not only brought up the rear with $543k, it was also the only online operator to report negative growth for the month, falling 8.8% year-on-year.