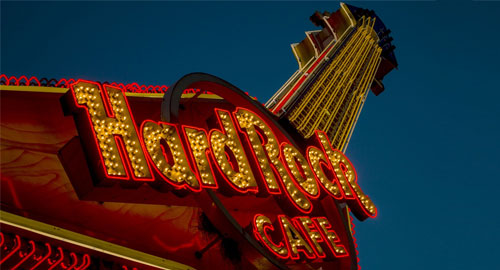 Hard Rock International (HRI) has had a closely intertwined relationship with music and gambling for decades. Just saying the name Hard Rock is enough to conjure up visions of gaming tables and autographed guitars and jackets in a single image. As huge as the company is, however, it was missing a key element that seemed to be at odds with the brand itself. HRI can be found all over the U.S., as well as outside the country, but it wasn’t allowed to claim ownership of the brand in Las Vegas. That has now been remedied after HRI purchased the intellectual property (IP) rights to the brand and all its trademarks in Nevada from Juniper Capital.

Per a press release from HRI from yesterday, the company has sealed the deal on the acquisition from Juniper, giving it full access to everything previously controlled under the Hard Rock Hotel & Casino® Las Vegas name. This includes all signage, merchandise, memorabilia, IP, websites and anything else Juniper had assigned to its Hard Rock operations. HRI Chairman Jim Allen states in the press release, “This agreement marks an exciting chapter for Hard Rock, in Las Vegas and beyond. We look forward to the opportunity of enhancing our presence in Las Vegas, which will always be one of the most iconic entertainment markets in the world.”

Juniper is part of a larger conglomeration of entities that count Virgin Hotels among its operations. Virgin Hotels owner Sir Richard Branson purchased the Vegas Hard Rock just over two years ago, with plans to convert it into a Virgin-branded resort. There has been talk of the Hard Rock name making a return to the Vegas landscape and, should that happen, it will now do so under HRI’s umbrella.

The terms of the deal weren’t announced, but it’s a coup for everyone involved. Given the sudden drop in revenue experienced by casinos around the world, the ability of HRI to lay out funds for what could only be a massive purchase speaks well of its financial health. The decision may have been made a little easier after it was revealed that the company had lost its appeal to put a casino resort in Greece, freeing up some cash. At the same time, Branson has already made it clear that he needs to shore up his businesses to stem the bleeding, and this transaction should provide a significant amount of help as Branson looks to raise at least $500 million.

HRI had worked diligently and steadily on Hard Rock brand expansion since it acquired the rights to the name in 2006. However, it was never able to extend its reach to anywhere west of the Mississippi River because the Hard Rock brand’s original owners kept that region for themselves when they sold the brand to the Rank Group in 1990. Now, HRI can finally get its hands on one of the most iconic brands in the most iconic gambling city in the world.