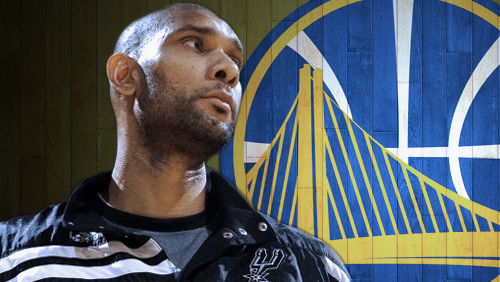 In the long history of professional basketball, only 15 teams have finished with a winning percentage of .805 or higher. The best finish ever was by the 1996 Chicago Bulls, who earned a grizzly 72-10 SU record that gave them an unmatched .878 winning percentage. Right now the Golden State Warriors have a legitimate shot at matching or beating that record with a 56-6 SU record that gives them an astounding pace of .903.

But here’s where things get really cool – there has never been a season where two teams have finished .800. To do this you need 66 wins in an 82-game season. The Warriors are well on their way to hitting that mark at a minimum but so are the San Antonio Spurs.

THE BEST STATISTICAL TEAM IN THE LEAGUE

San Antonio has gone “under the radar” to a certain extent because the Warriors have essentially hogged the spotlight. That’s to be expected when Golden State is having a season for the ages, but any long-term investor is going to want to take a look at the Spurs because of their current 4/1 odds to win the NBA Championship. That number is simply a lot easier to make money off of than the 2/3 odds of the favored Warriors.

It’s not a blind chip shot either. The Spurs have the third best offensive rating in the league, with a mark of 108.9 that trails just Oklahoma City (109.6) and Golden State (112.1). More importantly, they lead the league defensively with a 95.5 defensive efficiency rating. Under traditional basketball metrics, they’re the top defense in the NBA by a country mile. They’re first in opposing points (92.3), opposing field goal percentage (43.2), first in rebounding and second in three-point percentage. They’re also second best in total rebounding.

Where San Antonio gets the edge, however, is in an advanced stat category known as net rating. This is the numerical difference between their overall offensive and defensive ratings. San Antonio is +13.5 in net rating, which leads the league overall, and edges out Golden State’s 11.7 mark in this category.

This might seem like tiny margins, but these are the areas where sharps and sharks can make their biggest coin. We’re 62 games in to the season. These long standing advanced metrics for the top teams carry hefty weight, and even the smallest advantage can pan out big time for the betting man. We’re talking about the difference of betting on the Spurs with $100 getting you $400 instead of $67 with the Warriors. Multiply that by whatever you’re willing to wager and you can see why the Spurs are absolutely worth your attention.

Betting on anything is hardly one-sided. Coaching, player dynamics, game planning and personnel also factor in under the “intangibles category” that tend to be much more difficult to measure. However, we can look at the three best teams in the league right now and see how important these x-factors can be.

The beauty of San Antonio is their understanding of the long game. Popovich has been an absolute mastermind when it comes to managing minutes, and he’s so intrinsically skilled at this ability that not even his best protégés can mimic his talents in this department. It’s the biggest reason that San Antonio has remained an absolute juggernaut for so long.

Let’s not forget that the run San Antonio made in 2014 was one of the most brilliant displays we’ve seen in the history of the game. They were the runaway favorites to repeat before they were upended by the Clippers, who played to their potential in a seven-game series; finally. In the wake of that upset rose the Warriors, who are now reliving the exact same problems that Popovich routinely tries to avoid.

IS GOLDEN STATE RUNNING OUT OF STEAM?

What I’m talking about is pursuing greatness at the cost of your team’s health. Golden State has been undeniably great this entire season, but they are coming off a head-scratching set of games that include a loss to the Los Angeles Lakers, two near losses to Oklahoma City, a scare from the Atlanta Hawks and a very near loss to the Orlando Magic.

Studying the vacuum of a telling five game set where the Warriors have gone 4-1 SU and 1-3-1 ATS can easily be taken with a grain of salt. But a blowout to the Lakers with 20 turnovers, that’s followed up by a mistake-riddled game against Orlando that included 24 turnovers, can still tell a significant story.

The Warriors have been an average team in terms of securing possessions. They give the ball away 15.5 times, which ranks out as the 14th worth/best mark in the NBA. It’s not damning in any way. But a recent slew of mistakes against two lottery-bound teams at least raise a few red flags.

Turnovers can be the result of many things, but with truly great teams they’re usually caused by either a lack of discipline or mental fatigue. Let’s make no mistake – there hasn’t been a single game that the Warriors have taken lightly all season and the cost of all that winning can end up charging a hefty price.

In its best-case scenario, fatigue leads to some mental gaffes and a loss here or there. No reason to panic. In a worst-case scenario, however, physical and mental overload can put you on a straight path to injury. It’s one of the things that Popovich steers clear of outright because he needs his Big Three healthy considering that they have a combined age of 110 years.

So Kerr has a very big choice to make: chase the record set by the 1996 Bulls or recharge the tanks for a championship run. He’s already said that the priority is repeating in June so we can all assume what he’s going to do. But suddenly switching gears from “kill everyone” to “just kill when we feel like it” can jar a team’s momentum. Especially when you’re as young and full of piss and vinegar as the Warriors.

THE SPURS AND THE LONG GAME

This is a much different mindset than the Spurs who simply want to get to the playoffs in any way they can, with any seed, and just take things from there. The focus for the Spurs has been plain and simple: win a championship before Tim Duncan is no longer useful. They’ve been micromanaging injuries and developing an absurdly deep rotation for the harrowing battlefields of the playoffs. By all angles, it’s hard to say that the Spurs have even begun to peak.

Will that strategy pay off for the Spurs the way it did in 2014? It’s very easy to scream affirmatively about it until your eyeballs explode because of the collective experience that this team boasts in this regard. They know how to get to the important moments and win. They also know that losing in the regular season isn’t that big of a deal. Even then, they’ve only lost three more games than the potentially record-setting Warriors. The NBA season as a whole is an endurance challenge that the Spurs have grinded their axes against for well over a decade.

The big thing we don’t know about Golden State is what their burnout rate is. There’s no way of telling how long they can keep this up because they’ve never done it before. I can’t promise you that their near-losses in the last week and a half are telling of their remaining twenty games. And I don’t know if the pressure of chasing that previously untouchable 72-10 SU record set by Michael Jordan and Scottie Pippen is wearing on them.

What I do know is that things like that aren’t weighing down San Antonio. They’ve gladly operated as the second best team by record, while silently earning the nod as the most productive team in the most important stat categories, while rewarding bettors on an absurdly awesome basis. That doesn’t mean it’s a cakewalk by any stretch.

The biggest reason to shade the San Antonio Spurs is the feared small ball lineups of Golden State. The Death Ball lineup of Curry-Thompson-Igoudala-Barnes-Green is the most efficient lineup in the league by net efficiency. The scary part is that the second version of that lineup (which swaps out Harrison Barnes for Festus Ezeli and Klay Thompson for Shaun Livingston) is the second best lineup in the league by net efficiency.

To put this in perspective, the starting lineup of the Spurs is ranked 19th in net efficiency with a 22.2 rating. The Spurs can run a smaller lineup that’s not that “small ball” by definition that has a 21.7 net efficiency. Of all the things that San Antonio does so well, the one thing they have not directly addressed is how to deal with Golden State’s small ball lineup.

If the first time these two teams met in January is any indication, we won’t find out what Pop has in store for Kerr’s wrecking crew until the Western Conference Finals. San Antonio plays the Warriors twice over the final five games of the season, and if there are any Jedi mind tricks left in Pop’s bag, he’s going to unleash his team’s best in their final meeting on April 10th. Why? Because nothing would sour the pot more for Golden State than knowing that the Spurs have a recipe to beat them.

This argument also goes both ways. At peak, twin tower mode, the Spurs can just as easily decimate the defense of the Warriors as they have against various small ball lineups like Dallas and Miami. It’s not a completely fair comparable, but undermining Pop comes with certain doctor’s warnings.

Boiling things down is what allows a long-term gambler to sleep at night, so I’ll do you that favor right now. It seems downright silly to believe that any team can beat either of them in a seven game series given the sordid makeup of the Western Conference.

What you’re actually betting on is the longevity of the Spurs within a season, against the potential burnout of the Golden State Warriors. These are both real things. Bad luck can hit at any given moment, but the pressurized steam cooker the Warriors have placed themselves within raises the probability of injury exponentially.

Playing his key players at full mettle might make the Warriors the best team of all time. It also might hurt someone. Am I making you nervous about your Warriors’ bet yet?

Seriously, don’t worry. The Spurs are 110 years old. Remember? Injuries are bad luck more than anything and they can pop up like a bad zit. You should just be made aware of what the Warriors are doing and how it might actually hurt their team.

BELIEVE IN POP, BET ON EXPERIENCE

You can absolutely believe in your heart that the Spurs have an answer for Golden State’s otherworldly attack. They haven’t tipped their hand in any way this season directly to the Warriors, but we’ve seen them succeed against good perimeter shooting teams and smaller lineups. And this is the Spurs we’re talking about.

To veterans of the NBA betting game, relying on Popovich is a dead simple proposition. We know that he gears his teams to peak at the right moment, and if that happens properly, they can beat anybody. You can’t say that about any other team in the NBA. You can’t even say that about Golden State given that they’ve never burned this bright before for this long. It’s more conceivable that the Warriors flame out spectacularly after chasing history while the Spurs patiently wait for their moment to strike. They’ve simply been at this for a longer sample size with more consistent results.

That’s the beauty of Gregg Popovich at work.