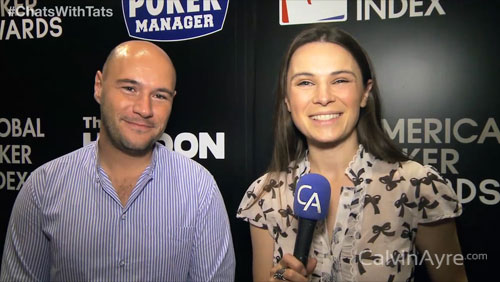 In this episode of CalvinAyre.com’s Chats with Tats, CEO Alex Dreyfus talks about Global Poker Index’s plan to create an NFL for poker in the next five years.

It’s been a busy year for Global Poker Index.

Last March, the poker ranking authority successfully launched its first poker’s World Cup in Malta, where 40 players battled for points that will determine who is the top poker country in the world.

“It went very well and I really enjoyed it. We’re gonna do it again next year, and we announced it already,” CEO Alex Dreyfus told CalvinAyre.com.

Aside from that, Dreyfus said GPI is also busy with several projects, including renaming the Masters as “the GPI World Cup to really make it like a statement.”

“The very, very big investment that we’re gonna do is called the League,” Dreyfus said. “The Global Poker League, GPL, which is gonna be the first professional poker league.”

Dreyfus said GPL will be like the NFL for poker, but on a smaller scale.

“Of course, not so big, but the idea for the next three to five years is to create eight, 12, 20 franchise teams, poker player teams that’s gonna compete against each other. You’re gonna have playoffs, you’re gonna have finals, and it’s gonna be held in a big sports arena,” he explained.

In an earlier interview, Dreyfus—who has been in the online poker industry for a decade—said he wants to expand the poker business and make it more mainstream.

“I am fighting trying to promote the fact that poker is a skill game. It’s a sport game; it’s a brain game and it’s not just gambling,” Dreyfus said.

Still, Dreyfus said GPI has yet to change the poker scene.

“Being pragmatic, we haven’t changed anything. We’re just trying to build a platform that’s hopefully in the next three to five years, will change a lot of things,” Dreyfus said.