Home / Poker / Alex Dreyfus: “I Haven’t Achieved Anything Yet” 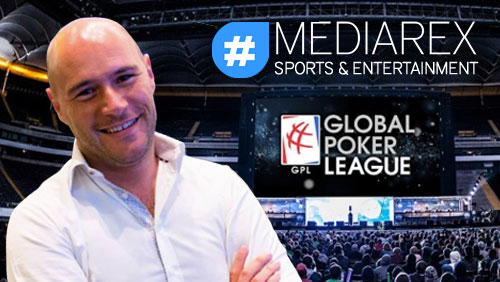 Lee Davy sits down with Global Poker Index CEO Alexander Dreyfus to talk about the $4.9m that Mediarex Sports & Entertainment have raised in funding, the Global Poker League and much more.

When I look at the Global Poker Index (GPI) I see a well-established business that’s quickly cementing its place into poker’s front garden. Each time you walk out of the front door you see it in all of its might.

That’s not what Alexandre Dreyfus sees. Instead the GPI CEO sees a work in progress.

“I haven’t achieved anything yet.” He told me whilst shuffling a pack of cards in his hands.

In this short interview we talk about the process of raising $4.9m to Sportify poker, the fragmentation of our game and what he intends to do about that, the Global Poker League and the effects that scandal has on his ability to sell our game to a much wider audience.

The following is an abbreviated version of the audio that you can find above this copy.

Mediarex Sports & Entertainment has raised $4.9m to Sportify poker – how does that process work?

“I have been working in the Internet space for 18-years, so I’m experienced when it comes to fund raising activities. I acquired the GPI three years ago from the Epic Poker League. Until now I have funded it myself. We are a 15-person team and so that’s a significant amount of money.

“Now we are getting ready to move into the next phase – by that I mean we have something that is relevant and meaningful in order to grow our vision. At the beginning of the year I started meeting potential investors, and talking to people I believe can bring value to my company. I spoke to some people who clicked immediately in terms of what I wanted to achieve. So the experience has been very positive for me.”

Is there any reason why you didn’t seek funding earlier?

“When I acquired the GPI I was on holiday with Eugene Katchalov and ElkY. They suggested investing $100k each into the company. I said no. It was too early to commit to people that I knew in a company that I still didn’t know where it was going to go. Secondly, I didn’t want poker players involved to avoid a conflict of interest. Let’s imagine Daniel Negreanu is an investor of the GPI (which he isn’t) and he becomes the #1. Then everyone will start saying he is #1 because he is a shareholder, so I wanted to disconnect the poker community from what we do. The timing is right now. We have a proper and steady business view of what we want to do and what we want to achieve, and fortunately that appeals to our investors.”

When did you realize that you had something special with the GPI?

“Funny enough I don’t think we have anything special yet. We have a good foundation but this is not enough for me to feel like I have achieved anything. We need to build on that foundation. We are 5-7% of what I want to achieve. What we have done for the past three years has been our build up. We acquired the Hendon Mob, the GPI, and the European Poker Awards (EPA). Like a scientist we tried some initiatives. Some worked and others didn’t. I have no claim to have achieved anything. I am just thrilled to be building what I am building, and going where I am going.”

Are you the type of entrepreneur that has a definitive plan laid out in front of you, or do you move in relation to the ever-changing ebb and flow of your business model?

“Any entrepreneur will say both unless they are very stubborn. You cannot score at the first try. Whatever you had at the beginning will never keep the same shape. When I acquired GPI I had a rough idea that I wanted to Sportify poker, create the league, awards and the World Cup. But the way we have achieved things is very different when compared to how I thought we were going to achieve them in terms of timing, costs, structure and framework.

“In a few weeks time we will announce a GPI Player Consulting Committee. It will be 5-6 players that will bring some insight and premium to us. We are a very open-minded company. 100% of our initiatives are geared towards our players. The GPI helps promotes players, the awards help promotes players, the World Cup is about promoting players, and the league will be about promoting player’s characters. That’s our job. Hopefully, we can help them generate revenue outside of the pure playing and winning part.

“We want to shift from a customer experience to a fan experience. You and I could play in the Rio and end up on TV. That’s good for you and me, but nobody at home gives a shit. Years ago when the fields were smaller the TV shows were focused on player’s characters. We believe the GPI/GPL needs to be built around highlighting a certain amount of players and building content around these players.

“Take boxing as a sport. It’s very fragmented. There are eight governing bodies for example. Poker is the same with the likes of WSOP, EPT and WPT. There is a lack of something strong. A little bit like the UFC. They took a game/sport of fighting and made it a little more violent. They re-marketed their product by focusing on the fighter’s. They spent a lot of money creating characters and fan engagement. We want to be the UFC of poker. We want to promote poker player’s characters.”

“One of the things we are going to do is create a lot of events outside of the casino – in sports venues. It’s going to be similar to the eSports industry. We are not going to copy what eSports have done, but we will draw inspiration from them. If they can create the engagement they have by showing video games then there is no reason why we couldn’t do that in poker. There are 100 million poker fans in the world. We can do this. We just need to acknowledge the fact that the game we promote may have to be a little different. We need to leverage that and learn from it.”

Can you give me some more insight into the Global Poker League?

“It’s going to start early next year. We will have a similar draft as they do in the American sports. We will build the buzz at the end of the year for that. The season will start with a mix of three type of events: online/remote events, studio events and live events. We will have a regular season, play off and finals – very similar to the US facing sports landscape, and we will have 4-6 players involved in each team. They will compete for a season with money to be won at the end. They won’t have to buy-in for a single cent. We have an agreement with TV in place, and a digital platform that we will announce in January. We want to try – and we might fail – to create a new sport vertical; a new fan experience where they are engaged with the game and characters every week.”

Is there a fear that players won’t want to participate?

“What we do is not for every player. You can only draft players who have signed a deal with the league. There are a lot of players who want to make free money, get exposed and build their name so we are not afraid. It’s true a lot of the top stars may not be interested in the beginning, but they could become franchise owners. I would prefer to have Negreanu as a franchise owner than a player. And by the way franchise owners cannot play.”

There are scandals in poker every week these days. Is this causing you any problems in your journey to Sportify poker?

“Of course it’s an issue, but in any single sport and business there will be issues. Take the Tour de France for example. Lance Armstrong was their star and it turned out he was a cheat. It didn’t kill the sport. In Europe we have match fixing in football. These things happen. Tough life, you have to live with it, fight against it, but you will never be able to avoid it.”