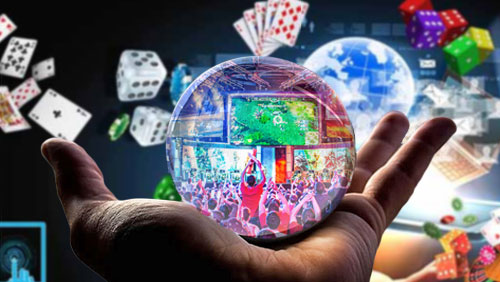 This is a guest contribution by Mark McGuinness, eSports Futurologist for Mainstream Marketing & Communications Ltd. If you would like to submit a contribution please contact Bill Beatty for submission details. Thank you.

eSports, is the rapidly growing sector for competitive multiplayer video game competitions which has attracted the attention of the iGaming industry. Social betting has yet to come of age. So with this growth in this male dominated participant sport, could eSports be the next betting product vertical?

eSports tournaments are already filling entire arenas, with tens of thousands of fans, camped out at New York City’s Madison Square Gardens. There is no doubt eSports is like a tsunami. It’s sweeping everyone along in its path. And it’s no surprise as video gaming is a $100bn dollar business, which C-level iGaming executives are salivating over with profit figures in their eyes.

So why this sudden ‘Gold Rush fever’ around eSports?  Well, eSports looks to have hit the proverbial jackpot as a sport in America, plus it’s about to be considered for acceptance to the Olympics. Extreme make-over, you bet!  It’s no longer associated or stigmatized with previous image problems. Mainly around stereotypical computer nerds or hackers playing in their basements in unlicensed tournaments, eking out a questionable living!  And claims from other athletes as to how eSports could be considered a ‘sport’ in the first instance.

eSports has been given the Hollywood panache:  VIP treatment including razzmatazz, branding, glamour, designer clothes, stretch limos and all the other trappings of fame and fortune. It’s the new found American Dream, which has come at the right time after the financial meltdown in the economy. Previously chastised downtrodden Millennials, who had no real career prospects that played video gaming to while away the hours of a disenfranchised youth, can now realize their dreams. They are the new ‘rock stars’ of this social economy and now generation.  But of course for the cynical amongst us, it’s all about the ‘greenback’, and there is lots of it going around in this fast growing industry.

Let’s look at the numbers. eSports, last year 2014, Riot Games’ “League of Legends” world championship had 27 million streaming views. To provide some correlation, it was more than the average viewership of the World Series of baseball, which is the second most viewed sport in the USA. The number of eSports tournaments worldwide more than tripled from 430 in 2013 to 1,485 in 2014. These 1,485 tournaments got viewed by more than 100 million viewers worldwide demonstrates a huge spectator sport.

eSports viewing is on a par with other broadcast sports. Twitch the world’s largest video game streaming platform, which was acquired by the behemoth Amazon for near to $1bn last year. Recently reported that the average Twitch user spends around two hours a day on the site. And some users spend upwards of five hours watching the major players and events. What is more, Twitch generates more than 100 million unique viewers per month. Of that Twitch, viewers produce some 20 billion minutes of viewing time of the more than 11 million videos that are broadcast on the platform. The Twitch app has been downloaded more than 23 million times since its launch in 2011. That is a lot of eyeballs and potential advertising revenue that a traditional television network executive can only dream of selling airtime to brands.

eSports attracts a predominately and highly affluent male audience. They like to spend lots of money on video gaming of course, but also on other digital content. And of course watching people play professional eSports has been popular in Asia, one of the hottest betting regions for many years now.

So what about the demand curve for eSports betting? Well, as the industry has witnessed, sports betting and in particular betting activity is closely associated with the availability of live sport.  You just need to look at the growth of in-play betting and mobile usage around televised football. Combine this with advances in technology and video streaming, has therefore made television content even on multiple devices much more accessible to impulse or casual betting.   Another factor is that TV content is still considered a trusted medium by consumers across the generation divide, which in part allows brands to influence consumer purchase behaviour.  If you need more convincing, when the UK gambling commission allowed gambling advertising on terrestrial TV – it exploded. And for those betting companies that could afford the advertising investment with 30-second ad spots, quickly increased new customers and increased market share over other pure play digital-only counterparts.

There is no doubt the nascent demand for eSports betting is here. UK betting brands are already providing betting on eSports matches. William Hill takes bets on Counter-Strike and DotA 2, and provides a selection of eSports matches to the likes of Paddy Power offering odds on the larger event tournaments. Indeed, Pinnacle Sports an early first mover in the space started offering odds as early as 2010. Recently reported last year that it took its millionth eSports bet and are on track for its two-millionth eSports bets in a much shorter time frame.

So ‘fad or future’ for eSports betting? Ultimately the size of the eSports betting market shall be determined by the fans themselves. After all for anyone who hasn’t played a game like Dota2, it’s complicated with different levels, skill requirements and lots of concentration. It is therefore not for the faint heartened.

Does that ring any bells? Sounds a lot like online poker in the early days, does it not? Only for the faithful that understood the game and had the skill.  Plus it would never take off as a broadcast or spectator sport.  Poker has been a ‘fad’ for some 15 years’ now and a lot of companies have made a lot of money during that time. eSports could well be the new ‘poker’ that an industry is waiting for.