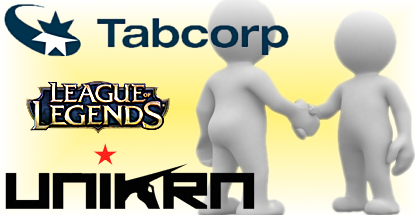 Tabcorp’s Northern Territory-licensed online betting site Luxbet has agreed to provide a betting platform for the US-based Unkirn, which boasts a 9m-strong global eSports community that watch live multi-player gaming tournaments involving League of Legends, Counter-Strike, Dota2 and other games. Tabcorp has also taken an undisclosed stake in Unikrn as part of the deal.

The new platform will provide access to live viewing, live discussions and competitive odds, but betting on the outcome of eSports matches and tournaments will be limited to jurisdictions in which such activity is legal. Tabcorp will be responsible for ensuring no bets are placed from disallowed jurisdictions or by underage gamers. At launch, the eSports wagering will be limited to match and tournament outcomes but “further bet types” have been promised for future rollout.

Unikrn CEO Rahul Sood, who until recently was GM of Microsoft Ventures, said the idea was to provide “a secure, legal and fun arena for adults to gather, game and bet on eSports.” Tabcorp CEO David Atttenborough said his firm was chuffed to have teamed with “a global gaming community platform that reaches millions of gamers around the world, with a proven record of innovation and success.”

There are an estimated 500k Australian eSports fans but Attenborough said the new betting platform could expand to regulated European betting markets if the Aussie launch proves a success. Attenborough says there are around 200m global eSports players, about the same as the National Basketball Association, which is currently Tabcorp’s most popular sports betting offering.

Attenborough rebuffed criticisms that the new platform would encourage younger people to gamble, telling the Australian Financial Review that 71% of eSports spectators were adults. Attenborough also said Tabcorp would utilize its existing technology to monitor for any suspicious betting patterns that might suggest the fix was in.