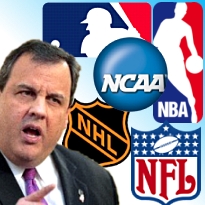 America’s professional and college sports leagues filed a lawsuit on Tuesday to block New Jersey from going ahead with its plans to offer single-game sports betting this fall. In July, New Jersey published its sports betting regulations for operators, and the plan was to start processing applications following a 60-day public comment period that expires Aug. 31. The suit (read the complaint here) was filed in US District Court for New Jersey on behalf of the National Basketball League, the National Football League, the National Hockey League, Major League Baseball and the National Collegiate Athletic Association. Listed as defendants are NJ Gov. Chris Christie, NJ Division of Gaming Enforcement and Asst. Attorney General David Rebuck, plus the exec director of the New Jersey Racing Commission, Frank Zanzuccki. (Ironically, the firm representing the leagues – Skadden, Arps, Slate, Meagher & Flom – is the same firm repping PokerStars in their legal tiff with the US Department of Justice.)

The sports leagues’ complaint rehashes their traditional/hypocritical arguments, namely that sports betting would irreparably damage the integrity of sports by encouraging match fixing and the like. As always, this argument ignores the fact that sports betting is already happening in Nevada, and, well, everywhere else. What’s more, organized sportsbooks looking to defend their bankroll have historically been the chief method by which the majority of match-fixing incidents were detected. But the most blatant hypocrisy exhibited by the complaint is the leagues’ – and the football leagues in particular – willingness to pretend that sports betting hasn’t been responsible for much of their burgeoning popularity, as evidenced by their tacit condonation of the publication of betting lines in major media outlets.

Morality aside, what Christie has argued – and is echoed by similar legislation advancing in California – is that PASPA, the 1992 federal prohibition on single-game sports betting everywhere except within Nevada state lines, is unconstitutional, in that it views an activity legal only if it’s confined to one particular state. Christie has previously stated that he wanted to provoke the feds into challenging NJ’s plans in order that NJ could challenge PASPA’s constitutionality in federal court, so game on, bitches.

NEW JERSEY RESPONDS
NorthJersey.com’s John Brennan reported Christie’s response to the lawsuit thusly: “The battle is engaged. I have a conference call at 5pm this afternoon with the attorney general and the director of the division of law to talk about the next steps that we’ll take legally to defend our position.” Addressing the leagues’ integrity concerns, Christie reasoned that “if it was a grand, nationwide prohibition maybe that would be an argument, but how is [New Jersey sports betting] going to affect the sports leagues any more than it already affects the sports leagues in Nevada?” As for the possibility that the legal tiff may interfere with New Jersey’s plans on hosting the 2014 Super Bowl, Christie said he had “no concerns … I think we can walk and chew gum at the same time. We can prepare for the Super Bowl and do a great job with the Super Bowl and we’ll have our separate legal fight over whether or not sports gambling should be legal.”

New Jersey state Sen. Ray Lesniak, the point man behind most of the state’s gaming expansion efforts, issued a defiant statement regarding the lawsuit: “Let the games begin. From the start, we wanted our day in court to prove that the federal ban on sports wagering is unconstitutional. By moving forward with a law to legalize sports wagering in New Jersey – a law that was approved overwhelmingly by the voting public of New Jersey – we drew a line in the sand and dared the sports organizations to cross it. Their lawsuit today means they’ve played right into our hands … Frankly, I was wondering when they were going to take the bait.”

Rep. Frank Pallone (D-NJ), who introduced a bill at the federal level in January that would add New Jersey’s name to the PASPA-approved list, said he was “outraged” by the leagues’ “disappointing” lawsuit, which he said reflected “a naïve and unrealistic notion that prohibiting New Jersey from allowing sports betting will somehow reduce or prevent gambling on professional and college sports.”

Dennis Drazin, the Monmouth Park racetrack operator who volunteered to be the state’s sports betting guinea pig after Atlantic City’s casino companies expressed reservations about annoying federal legislators on whom they may depend for kindly treatment in other legal discussions, welcomed the lawsuit, saying “we’re prepared to litigate the issue, and we believe we will eventually be successful.”