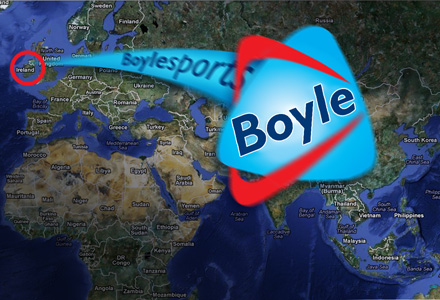 The phrase ‘recession-proof’ is one that has often been discussed with regards to the iGaming industry.

Whether or not you’re of the opinion that online gambling has escaped the wrath of financial gloom, or even whether the phrase is possible, it’s hard to deny that there are examples of gambling companies who are bucking the trend of hard times with profit and expansion.

One such example is coming from the most unlikely of countries given its current financial situation – Ireland.

The company is Boylesports, who are undertaking massive change throughout, following a period of success. The bookmaker opened a grand total of 40 new stores in Ireland last year, some of which coming courtesy of their more established counterparts William Hill.

Turnover for 2012 is estimated to be at around €1.2 billion and there are now 177 retail outlets with the bookmakers name on show. So it would appear that founder John Boyle has now more or less conquered his homeland in retail terms.

Boyle revealed as much to the Irish Times in April when he explained that his company’s focus was now on their online operations.

He explained: “Technology scared me. I’m old school, pen and paper. It’s been a slow learning curve and it’s only now that we’re cracking it.”

To do so Boyle has had to make big changes. In February the company split its online and retail divisions into separate areas of the business in a move which completely contrasted the strategy of Ladbrokes. This left Boylesports as the retail division and saw the creation of Boylesports Online as the digital arm of the company.

The man who has been charged with the task of emulating Boylesports’ success online is CEO Keith O’Loughlin who graduated from Head of Online and Mobile to his new role.

His words echo those of Boyle’s in confirming that the company is taking the online world very seriously.

“We have had an extensive investment in our product and platform over the past 18 months and now have a very robust infrastructure delivering an unrivalled service to our customers.”

O’Loughlin is quick to point out that this investment in technology is already paying off.

“We were one of the few bookmakers to suffer no outage during the Cheltenham and Aintree festivals and at the same time enjoyed record growth, beating most of our previously set records by 200%!”

These two facts are likely to have a causal relationship as we see time and time again that placing faith in the best technology provides a major boost in iGaming. As a former CTO in the professional learning industry, O’Loughlin is likely to be well aware of the importance of technology.

April saw the launch of a new sportsbook interface while a new Playtech-powered casino was added in December. A deal with casino software suppliersNetEnt was also secured last month to add extra variety to the games tab available on their site.

O’Loughlin confirms that this won’t be the end of the new products either. He says: “We see this as the beginning of a very aggressive rollout plan for new, innovative and functional products to deliver a better experience to our customers month on month.

“We will be launching several new games in the coming weeks which will really differentiate us. Each of our product offerings is driving forward very rapidly.”

“We will launch a new mobile and web interface for our sportsbook in Q3 this year which will set us apart from the market in terms of customer experience. Also, we have a huge range of games to be launched across mobile which will be a game changer.”

All of this sounds and looks extremely promising but you can’t escape the fact thatBoylesports are somewhat late to the online gambling party. Their home market of Ireland and the UK is already crowded with online operators who either have their niches or have much greater existing customer bases.

While their new products may set them apart, it’s unlikely that they will be so advanced that they’re able to steal a huge amount of UK online customers.

But, as O’Loughlin explains, this is where the company’s status as a private company is a major advantage as they aren’t confined to the walls of regulated markets. And of all the unregulated markets, the most tantalising to all operators is without doubt Asia.

“We are growth focused and we are looking at all markets as a means of expansion. The size of the Asian market coupled with our agility makes it an obvious expansion target area,” O’Loughlin says.

It’s clear from the plans put in place at Boylesports that Asia is an area where they believe they can gain a significant market share. First of all there was their shirt sponsorship of Premier League football side Sunderland – a tactic which we have seen from many Asian-facing operators looking to raise awareness.

O’Loughlin reveals this will be an area that they continue to look into: “With our Asian expansion we will explore Premier League partnerships along with all possible partnerships that will help our business in the region.”

Creating awareness in a different continent is all well and good but ensuring that people from an entirely different culture enjoy a product is just as important. To combat this, Boylesports are creating a product which will be tailored to the Asian market.

“Our European product offering includes 35 sports betting markets from the very popular to the somewhat niche sports. Our Asian product will be offering a smaller range of sports initially around the most popular sports in the region.

“The Asian market also demands a user experience that is very different to the European experience, with Asian line odds and a completely redesigned product front end to deliver the best tailored customer experience in the region.”

This tailored approach may appear an obvious one to take but it’s one that many operators who work across continents fail to take. More importantly, it’s an approach that many more iGaming operators need not take – primarily because their public status doesn’t allow them to operate in Asia.

The problem of adapting to operate across continents is one that many bookmakers would surely like to have. Unfortunately for them, they’ll have to watch on as Boylesports confront this issue head on.

On current evidence, the Irish bookmaker appears to be doing so in the right way with an importance being placed on knowing the customer.

O’Loughlin concludes: “The key is to get an understanding of the market and to have a product offering that suits the market, rather than try and shoehorn what you have to sell into a market.

“Our belief is that if you understand the customer and provide the best product for their needs you will be successful in all markets.”