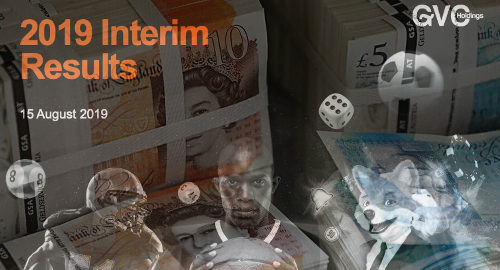 On Thursday, GVC released its financial report for the six months ending June 30, during which pro forma net gaming revenue – which assumes ownership of the Ladbrokes Coral brands in both reporting periods – improved 5% to £1.81b and underlying earnings also rose 5% to £366.8m

However, new taxes and duties in multiple markets, increased regulatory compliance measures and the crackdown on UK retail gaming left its after-tax profit at a mere £2.1m versus £113.8m in H1 2018. Regardless, GVC felt bullish enough to boost its full-year earnings guidance to a range of £650-£670m, up from the previous target of £630m.

The online segment got a boost from last year’s additions of Crystalbet in the Republic of Georgia and Neds in Australia, but increased taxes and duties in the UK, Italy and Australia took their toll on online earnings.

UK online revenue grew by 13% in H1, with Ladbrokes.com’s growth described as “particularly impressive.” Along with a solid showing by the Coral and Gala brands, GVC said it could now claim the mantle of “the number 2 online operator in the UK,” assuming Bet365 is the market’s unspecified Godzilla.

In Italy, online revenue was up 15%, and its three brands (Eurobet, bwin, and Gioco Digitale) are now fully coordinated under single management. GVC says new guidance on the scope of Italy’s new advertising ban means the adverse impact is “likely to be less than had been expected.”

In Germany, revenue was up 23% on a constant currency basis, and GVC expects its bwin brand will continue to make it rain in both betting and gaming – the latter contributing 55% of German revenue – assuming the regulatory uncertainty persists until the mid-2021 deadline for the German states to agree on a permanent gaming treaty.

GVC made the rather bold statement that it expects “to be given dispensation to relax any maximum monthly customer loss or spend limits that may be implemented” in Germany. Apparently, responsible gaming measures are something for the other German-facing operators to worry about.

GVC’s other markets enjoyed some embarrassingly high growth figures, rising 52% in Brazil and 49% in Georgia. GVC’s reinvigorated PartyPoker brand reported revenue up 16% thanks to expansion into Spain and Sweden and an ongoing emphasis on live events.

In the US, the Roar Digital joint venture with casino operator MGM Resorts spent the first half of 2019 organizing itself, including establishing a head office in Jersey City and hiring over 100 staff. The JV will “fully launch online” in New Jersey in tandem with the new NFL season, and marketing will begin ramping up in Q4.

RETAIL NOT AS BAD A HORROR SHOW AS EXPECTED
UK retail figures were far less rosy, with total revenue down 12% to £586.8m following the April 1 stakes reduction in fixed-odds betting terminals (FOBT). Gaming machine revenue was down by one-fifth to £311.8m while betting revenue was basically flat at £275m.

GVC called the retail showing “stronger than initially anticipated,” leaving the company optimistic that it will be able to take market share from its UK rivals. GVC closed 203 shops during H1, and expects to close a total of 900 shops over the next two years as it adjusts to the new retail reality.

Alexander noted that the industry was under sustained attack in the UK over its responsible gambling shortcomings – for which GVC itself has been called on the carpet – and 32Red’s sponsorship was “just a complete own goal. It is preposterous and ridiculous.”

GVC has been donating its many football partnerships to charities and the company revealed Thursday that Ladbrokes’ sponsorship of the Scottish Professional Football League for the past five years wouldn’t be renewed at the conclusion of the current season.