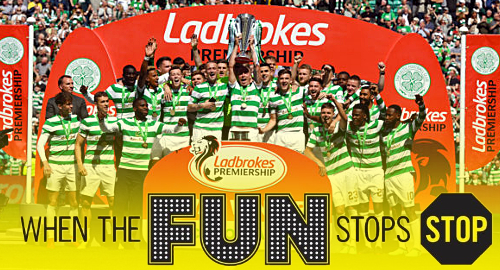 On Monday, GVC announced that Ladbrokes, which has sponsored the Scottish Professional Football League (SPFL) since 2015, would incorporate new responsible gambling messages into team uniforms, match programs and stadium signage for the remainder of its sponsorship.

As part of the Backing Responsible Gambling campaign, Scottish footballers will wear responsible gambling badges on their shirts starting with the 2019-20 season. Responsible gambling adverts will run in all match programs, with similar messages appearing on digital LED boards and interview backdrops.

These messages will be based on the Senet Group’s When the Fun Stops, STOP campaign, which first launched in 2015. Senet chair Gilliam Wilmot said the program had “proven its ability to connect meaningfully with players” and she called the adoption of the message by Ladbrokes and the SPFL “a great endorsement of the work we do.”

The campaign will also utilize former Celtic striker John Hartson, who previously struggled with his own problem gambling activity. Speaking at a campaign event launch in Glasgow, Hartson said the tie-up was “hugely positive” and hailed Ladbrokes for making the effort to “help people recognize the signs [of problem gambling] before they get to a stage where there is no return.”

At the same event, SPFL CEO Neil Doncaster defended his group’s reluctance to follow the lead of the English Football Association (FA), which walked away from a sponsorship deal with Ladbrokes last year after concluding that such relationships were inappropriate for a sporting body.

Doncaster noted that the FA “are in a wholly different position financially than us north of the border” and that “we shouldn’t shy away from the fact that this is helping us make a significant financial investment in Scottish football.”