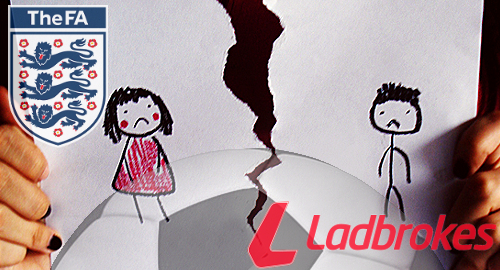 The English Football Association (FA) has scrapped its sponsorship deal with UK bookmakers Ladbrokes and says it will forego any future tie-ups with betting operators.

One year ago, the FA announced that it had reached a “long term agreement” that would see Ladbrokes serve as the league’s official betting partner. The four-year deal was reportedly worth £4m per year. But last month saw the FA announce that it was reviewing whether deals with betting operators were appropriate relationships for a sport-governing body.

On Thursday, the FA announced that its board had reached a mutual agreement with Ladbrokes to terminate their relationship three years ahead of schedule. The FA also said it would “end all sponsorships with betting companies starting from the end of the 2016-17 season.” However, the FA will continue to work with betting operators to monitor suspicious betting activity to ensure the integrity of the FA product.

Ladbrokes Coral CEO Jim Mullen said his group understood the FA’s position regarding their commercial partnerships with gambling, while FA CEO Martin Glenn thanked Ladbrokes for being “a valued partner” and for displaying “professionalism and understanding” regarding the FA’s decision.

The UK football sector has been struggling with some bad press stemming from players’ betting activity, including Joey Barton’s effective forced retirement from football after his fluttering fondness made international headlines, and Sutton United keeper Wayne Shaw admitting that he ate a meat pie on the sidelines of a match with the full knowledge that UK bookmaker Sun Bets had a prop market on that possibility and that Shaw’s mates had bet money on his appetite getting the better of him.

When the FA announced its betting sponsorship review in May, chairman Greg Clarke insisted it wasn’t a knee-jerk reaction to the raft of negative press but not everyone bought into Clarke’s denials. The FA has a strict prohibition against its players engaging in betting activity, even on matches in other leagues.