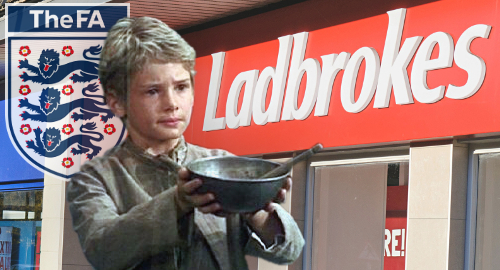 The English Football Association (FA) is rethinking its partnerships with betting operators while also seeking to impose a ‘betting right’ on bookmakers.

On Thursday, the Telegraph reported that the FA was reviewing whether it was appropriate for the sports body to have commercial tie-ups with gambling and alcohol firms. The FA inked a “long-term agreement” with bookmakers Ladbrokes last June and the FA also has deals with brewers Budweiser, Carling and Carlsberg.

The FA has been reeling from a raft of bad press, including last month’s suspension of former Burnley midfielder Joey Barton from all football activity for 18 months after Barton’s fondness for betting on football matches became widespread knowledge (or, more accurately, became more widespread).

However, the Times reported that FA chairman Greg Clarke had ordered a review of the FA’s betting and booze bonanza at the start of the season, and that the review was not a kneejerk, CYA reaction to the accusations of hypocrisy leveled at the FA in the wake of Barton’s punishment, the duration of which likely spells the end of his colorful football career.

The FA board will reportedly render its sponsorship verdict this summer, but the Telegraph understood that the FA was committed to seeing out its existing deals and would merely opt not to re-up with its current partners or seek out new deals with firms in these sectors.

At the time the FA signed with Ladbrokes, the FA said the deal would help underwrite the “record levels” of funding that the non-profit FA was plowing into “football at all levels of the game.” It’s unclear whether the FA would be able to find enough deep-pocketed non-controversial sponsors to replace the funding it stands to lose, but the FA has other financial options in mind.

The FA is reportedly pushing for a Football Betting Levy similar to the type enjoyed by the UK racing industry. For years, bookmakers have been kicking back a portion of the race betting revenue to racing, and last month saw the UK government impose a new uniform 10% levy on both land-based and online race betting revenue.

As the Telegraph noted, the FA isn’t the only sport looking to borrow racing’s begging bowl. The idea of applying the levy to all sports was even part of the Labour Party’s 2015 general election platform, a populist move that the governing Tories called a “short-term gimmick.”

Frankly, someone needs to remind sports bodies that their leagues would likely be far less popular if punters weren’t tuning in to find out how their wagers are playing out. Studies from across the pond have shown that bettors watch more televised sports and are on the whole more active and engaged sports fans than non-bettors. So who owes who a levy here?