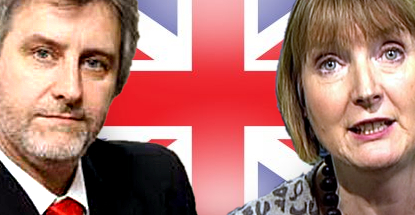 Key figures in the UK Labour party have announced plans to impose a new sports betting levy on gambling operators. Shadow culture secretary Harriet Harman (pictured right) and shadow sports minister Clive Efford (pictured left) have released a “sport for all” document laying out their plan to raise millions of dollars to help tackle problem gambling initiatives and increase UK youth participation in sport, should their party win the next General Election.

The proposed betting levy would target all UK operators, including the online variety. Labour wants to expand the existing 10.75% levy on horseracing betting revenue – which will cost UK betting firms £82m this year – by applying it to all sports. The levy would be voluntary to start but Labour would seek to enshrine the practice in law. The timing of the proposal is unfortunate to say the least, coming just as operators are bracing for the new 15% point-of-consumption tax (POCT) on online wagers that takes effect December 1.

Efford said Labour believes “it is right that businesses that make money from sport should contribute to sport.” Efford said football betting in shops and online “is now far larger than horseracing gambling and yet it does nothing to help the sport itself.” Efford suggested betting firms had “a moral obligation” to help sport “from which they make billions.”

A second levy would revive a previous deal that saw Premier League football clubs pay 5% of the sums they earn from domestic television broadcast rights. Such a system was enacted in 1999 but this deal wasn’t renewed after it expired, making the clubs’ contributions voluntary. The Premier League’s current domestic broadcast deal totals £3.4b over three years, making the new levy worth around £17m over that span.

Speaking to Reuters, Ladbrokes’ director of external relations Donal McCabe noted that the betting industry was already facing the POCT as well as increased duties on fixed-odds betting terminal revenue and warned that the industry was not a “bottomless pit” the government could use to make up revenue shortfalls.

A spokesman for the ruling Conservative party was equally dismissive of Labour’s tax grab, calling it “yet another short-term gimmick” from the opposition. A representative of the TaxPayers’ Alliance called it “plain wrong for politicians to force companies to cough up more on top of already huge tax bills and voluntary levies” and warned that Labour’s plan “will only push up the cost of watching sports both live and on TV.”

The UK will hold its next General Election in May 2015 and Labour appears to be staking out what it thinks is a populist position as the scourge of the betting industry. In December, Labour leader Ed Miliband launched an attack on the alleged evils of FOBTs and the perceived clustering of betting shops. With any luck, this campaign will culminate on the night before the election with Miliband facing off in a cage against Bet365 pitchman Ray Winstone. If that actually transpires, we wouldn’t even mind if we have to pay a levy to wager on the outcome.