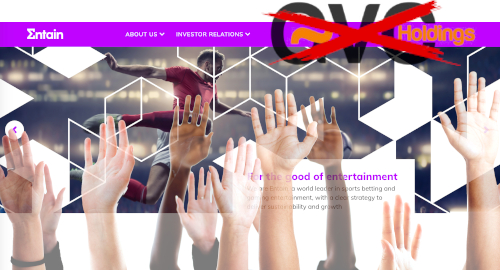 Gambling operator GVC Holdings has been cleared to rebrand as Entain, while laying out the global strategic vision for its new corporate identity.

On Wednesday, GVC shareholders overwhelmingly supported the company’s proposal to rebrand as Entain plc, with only 0.04% of votes cast opting to stick with the familiar. The extraordinary general meeting conducted its vote on a virtual basis due to the UK’s pandemic restrictions.

On Thursday, Entain rewarded shareholders by sketching out its global expansion ambitions, including plans to apply for licensing in Canada, which presumably refers to that country’s largest province Ontario, the only region (so far) to announce plans to open up its online gambling market to private operators.

A little further south, Entain says its BetMGM sports betting/iGaming joint venture with MGM Resorts is enjoying major success in its latest market Tennessee (despite getting smacked by a local wrestling legend). Entain says BetMGM’s Tennessee launch was the brand’s “most successful go-live yet,” with revenue already exceeding those of “more established states.”

BetMGM expects to be operation in 12 US states encompassing some 75m potential bettors by January, with Michigan’s launch now not expected to happen until early in the new year. Entain boldly predicted that BetMGM will be live in “over 20” states by the end of 2021.

Even further south, Entain says BetMGM has obtained an online gambling license from Colombia’s Coljuegos regulatory body and expects the site to launch “over the next month.” GVC/Entain previously had a presence in Colombia through its Sportium joint venture with Spain’s Cirsa but GVC sold its stake in the JV last year and this will definitely be BetMGM’s first trip south of the Rio Grande.

That said, Entain somewhat presumptuously claimed to be “the first global sports betting and gaming operator to gain a license in Latin America,” which may be technically true due to its Sportium history but may come as news to the good folks at Bet365.

Entain also announced a raft of new social responsibility measures, including a US-facing partnership between its Entain Foundation and charitable group EPIC to educate neophyte American bettors on how to gamble more safely. In Australia, the Foundation has teamed up with community-based non-profit Relationships Australia on a social media campaign to raise awareness of the signs of gambling addiction.

Back home in the UK, Entain announced that its recently launched ‘Pitching In’ grassroots sports investment program had donated £150k to the Trident Community Foundation. The funds will provide a leg-up to the 228 football clubs in the three Trident Leagues that are struggling under pandemic restraints.