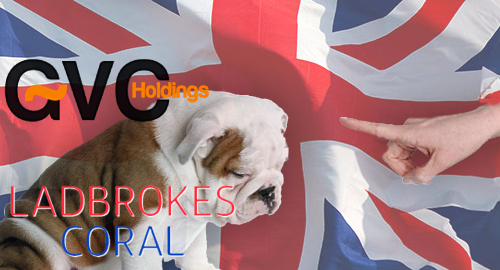 Gambling operator GVC Holdings has been penalized £5.9m by UK regulators for “systemic failings” in its anti-money laundering (AML) and social responsibility obligations.

On Wednesday, the UK Gambling Commission (UKGC) announced the imposition of a significant penalty package on the Ladbrokes Coral Group, which GVC acquired in 2018. The failings began before GVC’s acquisition but continued after the Lads-Coral operations were merged with GVC’s.

The UKGC says that between November 2014 and October 2017, Ladbrokes Coral “failed to put in place effective safeguards to prevent consumers suffering gambling harm and against money laundering.”

The UKGC probe looked at Ladbrokes Coral’s handling of seven online customer accounts and found that the company had ineffective controls for identifying signs of problem gambling or money laundering. Moreover, after the company realized its controls were insufficient, “the changes it implemented were not adequate to address the problem.”

The UKGC found that Ladbrokes failed to intervene despite a customer who lost £98k over a 2.5-year span making 460 failed deposit attempts and pleading with the company to stop sending him/her promotional come-ons. Ladbrokes also failed to carry out any interactions with a customer who deposited £140k in the first four months of opening their online account.

Coral failed to ascertain the source of one customer’s funds, despite that customer spending £1.5m over a nearly three-year span, during which he/she logged into their account an average of 10 times per day in a single month, while losing £64k in a one-month period.

The UKGC found that Ladbrokes Coral implemented its responsible gaming and AML controls in a manual format, which the regulator said “greatly reduced its effectiveness.” The UKGC also found that “interactions, and decisions not to interact, may not have been adequately preserved.”

The UKGC cited a number of ‘aggravating’ factors that led to its penalty decision, including the fact that “initial remedial actions put in place by Ladbrokes were not to improve resources but to reduce the number of high-risk customers identified.” In the ‘mitigating’ column, the UKGC said there was “no evidence of any attempt to conceal the breaches.”

The UKGC noted that Ladbrokes Coral’s management “were likely to have been aware of, and if not, should have been aware of” the shortcomings identified in the probe. The UKGC is still “making enquiries into the role Personal Management License holders played in these failures,” meaning high-level execs could face personal sanction down the road.

The penalty package includes GVC making a £4.8m payment “in lieu of a financial penalty,” the now-standard linguistic dodge that the UKGC has developed apparently to spare the companies the indignity of admitting they’d been fined.

GVC will also divest £1.1m it earned via Ladbrokes Coral’s failings and will divest itself of additional ill-gotten gains pending a review of its top-50 customers during the period spanning 2015-17. GVC has also committed to overhauling its responsible gaming and customer interaction processes, retraining staff and hiring new staff.

UKGC exec director Richard Watson said the “stolen money flowing through” the betting business and the harm done to consumers was “unacceptable.” Lord help GVC if any of its brands are revealed to be among the seven on-course bookmakers recently found to be allowing 16-year-olds to place racing wagers.

Despite the size of the penalty and the threats of more punishment to come, GVC investors largely shrugged at the news. GVC’s shares closed out Wednesday’s trading down only 2.7%. GVC’s penalty is the fourth-largest the UKGC has dished out in recent years, behind only 888 Holdings (£7.8m), Stride Gaming (£7.1m) and William Hill (£6.2m).