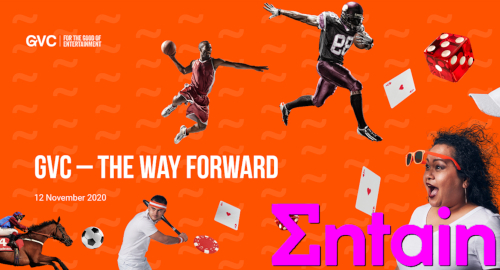 UK gambling giant GVC Holdings is undergoing a metamorphosis of both style and substance as it looks to shut the door on its youthful black market escapades.

On Thursday, GVC announced a plan to rebrand as Entain plc “to reflect the Group’s ambition to be the world-leader in sports betting and gaming entertainment.” Frankly, it’s now unclear what the company’s ambition was prior to Thursday, nor why this goal was unachievable under its former corporate identity but, hey, consultants gotta eat too.

While shareholders will be given the chance to weigh in on this rebranding exercise, GVC/Entain also plans to divorce itself from its former grey/black-market reliance. GVC claimed that 96% of its revenue comes from markets that are “nationally regulated or regulating” but the company has set a goal of pushing this to 99% by the end of this year and to derive 100% of revenue from regulated markets “by the end of 2023.”

The ‘or regulating’ qualifier is a big enough ‘but’ that GVC might well have chosen to rebrand as Kardashian Gaming, in that it’s GVC/Entain that gets to define whether a market intends to legalize or simply tolerate certain gambling activities. Regardless, the company maintains that it will exit markets “in which there are currently no viable paths to regulation.”

GVC’s US-facing joint venture (Roar Digital/BetMGM) with MGM Resorts would appear to the catalyst for this newfound commitment to regulatory purity. GVC’s rough ride in pursuing a Nevada gaming license last year featured some hard questioning about the company’s operations in legally sketchy markets such as Turkey, and the US expansion race is competitive enough without worrying about licensing delays in newly regulated states.

Furthermore, the company announced the formation of a new Entain Foundation that will donate £100m over the next five years “to the wider communities in which we operate.” Part of this cash splash will involve a ‘Pitching In’ program that supports “grass roots sports and sports people.”

GVC CEO Shay Segev called the flurry of announcements “an exciting new chapter” for the company, which will now lean heavily on the “broad pillars” of sustainability and growth. The company claims to have “long held the view that the most sustainable business in our industry will be the most successful business in our industry,” although the Turkish government might quibble over GVC’s definition of ‘long.’

Finally, GVC issued a trading update that claims favorable sports betting margins and “strong gaming performances” in its major markets will essentially offset the latest pandemic lockdown of retail operations in both the UK and Europe. The company also expects online earnings will get a bump of around £50m in 2021. Shareholders effectively yawned, as GVC shares are currently down less than 2% from Wednesday’s close.