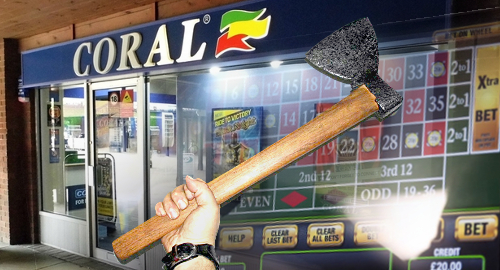 Ladbrokes and Coral betting shop staff are competing with each other to sign the most online customers in order to avoid getting the sack, according to a new report.

On Tuesday, the Guardian reported having seen an internal memo recently issued to staff at betting shops operated by GVC Holdings’ Ladbroke and Coral brands. The memo warns that GVC plans to close up to 1,000 of its 3,500 UK shops over the next 18-24 months, which will result in the loss of around 5,000 jobs.

Ladbrokes said its ultimate aim was to keep as many shops as possible open and job loses to a minimum, but some staff will face redundancies while others will have their schedule rolled back to 36 hours per week. No redundancies will happen before May 1, following a 45-day “collective consultation” period.

The memo details that these redundancies will be chosen via a ranking system, in which staff will be grouped by area and then whittled down to the appropriate level of staffing for the shops that will remain open.

For customer service managers, 40% of their score will be determined by their performance on an online test, 20% by a face-to-face interview and 10% on their past disciplinary record. The remaining 30% will be scored on how many retail customers they can convince to open new online accounts with GVC’s gambling brands.

Alexander likely wasn’t making a pun by using the word ‘terminal,’ but the retail decline is about to accelerate rapidly following the government’s decision last November to slash the maximum stakes on the fixed-odds betting terminals that have come to generate at least half of UK operators’ retail revenue. The new £2 max stake — down from £100 — takes effect on May 1.

Ironically, the very parliamentarians who helped bring about that stake reduction are now complaining that GVC is behaving in a “totally disgraceful” manner by recognizing fiscal reality. MP Carolyn Harris said she was “appalled, although sadly not surprised, that staff are being asked to take advantage of vulnerable people and urge them to sign up for online accounts.”

GVC won’t be the only UK operator sharpening its axe. Last month saw multiple UK media outlets claim that William Hill was preparing to close up to 900 shops, although the company has yet to confirm any figures.

Last week, the Arena Racing Company (ARC) warned staff that redundancies were likely following the expected betting shop closures. UK racing operators derive a significant chunk of their revenue from bookmakers via media rights for airing racing on their shop TVs and ARC estimates the closure of so many shops could cut these payments to racing by up to £60m.