The Fixed Odds Betting Terminals (FOBT) All Party Parliamentary Group (APPG), has staged a photo opportunity at Portcullis House with MPs drawn from across the political spectrum invited to show their support for the ‘Cut the stake. Reduce FOBT Harm’ campaign. MPs were invited to have their photographs taken alongside posters which have been designed to demonstrate the continued cross party political will for a lowering of the stake. One of the branded backdrops represented the amounts lost on FOBTs by geographical region, with London featuring a loss of £497m in 2015/16. Images and content from the photo shoot are being used through social and regional media to continue the political momentum as parliament enters summer recess. 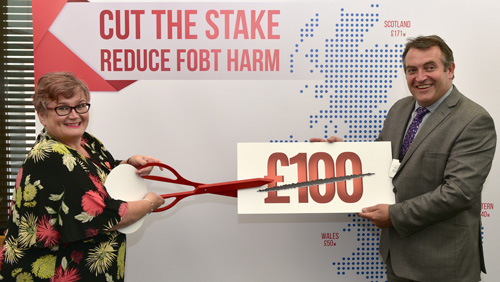 John White, bacta Chief Executive, believes the latest initiative from the All Party Parliamentary Group underlines the level of cross party support which exists to cut the FOBT stake. He said: “Bacta is an associate member of the All Party Parliamentary Group, alongside supporting organisations representing bingo, pub, adult gaming centres, coastal amusements, councils and the Royal Society for Public Health – all of which share concerns about the social implications of FOBTs. It’s essential that this issue remains firmly on the radar and that government recognises there is deeply held cross party support for a significant reduction in the FOBT stake.”

In January the APPG published a Parliamentary Report into Fixed Odds Betting Terminals based on the findings of a six month inquiry which took evidence from, among others, academics, problem gamblers, campaign groups, local authorities, industry experts, Gambling Minister Tracey Crouch, Sarah Harrison, Chief Executive of the Gambling Commission, Chris Kelly, Chair of the Responsible Strategy Gambling Board, Kate Lampard, Chair of Gamble Aware.
Commenting at the launch of the report, APPG Chair Carolyn Harris MP said: “There is now a clear case for the Government to substantially reduce the maximum stake which can be played on FOBTs. The time for prevaricating is over. These machines are easily accessed in the most deprived areas, sucking money out of the pockets of families. I support a responsible gambling industry, but there is nothing responsible about how FOBTs are currently being operated. I urge the Government to take action now.”