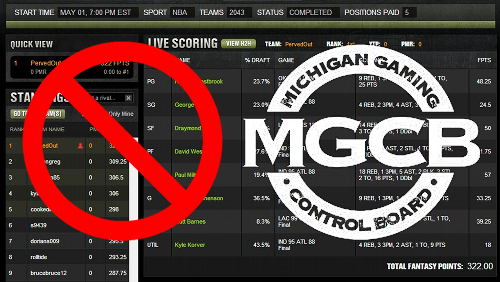 Fantasy sports – the season-long kind, not DFS, which didn’t exist at the time – received a carveout under the 2006 Unlawful Internet Gambling Enforcement Act (UIGEA), leaving it up to individual states to determine whether or not to permit real-money fantasy play.

At present, just five states – Arizona, Iowa, Louisiana, Montana and Washington – have made it unquestionably clear that they don’t want DFS companies serving their residents, and leading DFS operators like DraftKings and FanDuel have blocked customers in these markets rather than tempt fate.

The MGCB has no authority to bring prosecutions against DFS operators and the state attorney general’s office has as yet offered no indication that it intends to launch any DFS crackdown. In August, state Sen. Curtis Hertel announced he would introduce legislation that would amend Michigan’s penal code to clarify that fantasy sports is a game of skill and thus a legally permissible activity for Michigan residents.

A similar scenario played itself out in Kansas this year, which saw the Kansas Racing and Gaming Commission declare DFS to be illegal, only to have the state’s attorney general issue an opinion that DFS was a skill game and thus permitted under state law. One month later, Kansas Gov. Sam Brownback signed legislation expressly authorizing real-money fantasy play.

Regardless, Kalm’s pronouncement could make DFS operators think twice about continuing to accept wagers from Michigan residents. More importantly, it bolsters the growing public consensus that DFS = gambling and will bring further pressure on state and federal authorities to impose regulations on the current laissez-faire DFS industry.