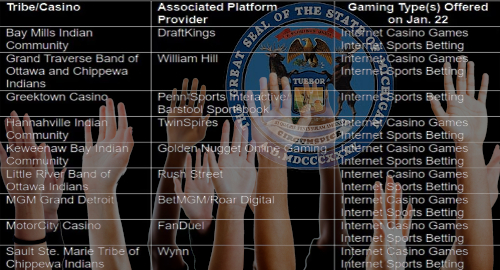 On Tuesday, the Michigan Gaming Control Board (MGCB) confirmed that nine of the state’s tribal and commercial casino operators and their respective platform providers had been cleared to launch online sports betting and casino games as of noon on Friday. The launch comes 13 months after Gov. Gretchen Whitmer signed the state’s iGaming legislation into law.

The nine lucky operators are six fewer than received preliminary approval in December but the MGCB said additional final approvals would be granted in the coming weeks pending successful testing of operators’ online systems.

All nine have been approved for online sports betting, while the Greektown/Barstool tandem is the only one that has yet to receive approval for its online casino product.

Michigan’s launch, the first of several US states expected to joing the online betting party this year, brings the number of states with legal online betting to 13. Michigan’s 10m population will rank third among these states in terms of population, behind only Illinois and Pennsylvania.

The launch can’t come quick enough for the state’s brick-and-mortar casino operators, particularly the three commercial venues, which suffered mightily in 2020 due to pandemic shutdowns and severely restricted capacity upon reopening.