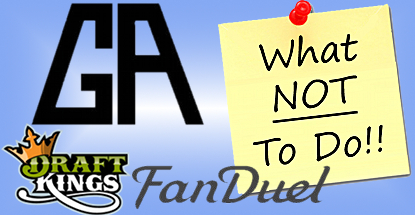 Gamblers Anonymous is considering adding fantasy sports to its list of no-no’s, further undercutting the daily fantasy sports (DFS) industry’s attempts to distance itself from gambling.

On Thursday, NBC’s affiliate in Washington, DC reported that the problem gambling 12-step program was considering revising its Combo Book recovery guide to include fantasy sports in the list of activities that compulsive gamblers should avoid.

The Combo Book, which GA members are advised to carry with them at all times, currently cites things like bingo, lottery or raffle tickets, office sports pools and trading stocks, commodities or options as activities that could prove problematic for individuals who have difficulty controlling their gambling activity. A proposal has been made to add the phrase “fantasy sports” to this list.

Altering the Combo Book requires two separate votes by GA’s international trustees. The next scheduled meeting of trustees is in October, while the following meeting isn’t scheduled until May.

A GA official told NBC4 that the fantasy sports proposal was added this week to the agenda of the October meeting. The source said the proposal “could very well pass. There has been a lot of trustee talk about it” given the dramatically increased profile DFS has enjoyed over the past year or so.

Whether or not the proposal is accepted, the news will be enough to make an already skittish DFS industry even more fearful that headline-hungry politicians will look to impose regulation on the sector. The industry’s protestations that DFS isn’t gambling are wearing increasingly thin and rarely does a day go by without a mainstream media op-ed arching an eyebrow at the deluge of DFS marketing pitches, especially as the nation braces for a new National Football League season.

Regulation appears more or less inevitable, threatening an already profit-poor industry with additional compliance costs. And the industry will only have itself to blame. Imagine, if you will, the response to an online poker, casino or sports betting commercial that opened with its own variation of a player stating: “After I played [blank] the first time, I was hooked.”