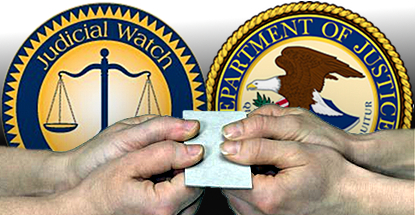 Conservative watchdog group Judicial Watch has filed a federal lawsuit seeking documents relating to the US Department of Justice’s revised opinion on the scope of the Wire Act.

In 2011, the DOJ surprised the gaming industry by issuing an opinion that the 1961 Wire Act applied only to sports betting. The opinion, which was dumped on an unsuspecting public two days before Christmas, paved the way for the intrastate online gambling markets currently operating in Nevada, New Jersey and Delaware.

The opinion was widely regarded as correct but was nonetheless controversial in certain circles. Case in point: the erroneously titled Restoration of America’s Wire Act (RAWA), the Sheldon Adelson-backed legislation that seeks a return to the good old days when the DOJ believed the Wire Act prevented virtually every form of US online betting save horseracing and on-premise mobile gaming offered by some US casinos (including Adelson’s Las Vegas Sands).

Republicans who support RAWA made the DOJ’s 2011 opinion a sticking point in holding up the nomination of current US Attorney General Loretta Lynch, who held her ground by stating that she was unlikely to reverse that opinion.

In its July 15 complaint to the U.S. District Court for the District of Columbia, Judicial Watch notes that it filed a Freedom of Information Act (FOIA) request last October seeking “any and all records” related to the DOJ’s revised opinion, “including but not limited to any records on the legal basis for the ruling under the Unlawful Internet Gambling Enforcement Act of 2006.” Judicial Watch says the DOJ was required to respond to its complaint by Feb. 18 but failed to do so.

Judicial Watch president Tom Filton said that due to the DOJ’s willingness “to violate federal records law rather than disclose information, Americans can presume corruption behind its decision to unilaterally legalize widespread Internet gambling.”

Judicial Watch has had mixed results suing the federal government, although it did succeed in obtaining the release of documents related to visits to the White House by former gaming industry lobbyist Jack Abramoff.

Meanwhile, don’t forget to tune in to TheTimJamesShow.com today (19) to catch its promised debut episode on Adelson’s online gambling hypocrisy, underscored by the prevalence of underage gambling and prostitution at Las Vegas Sands’ properties.