Home / Business / A Christmas present from the DoJ: Internet lotteries (and poker?) are legal 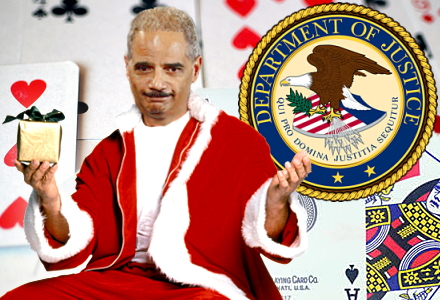 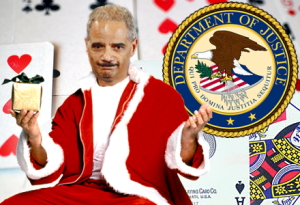 The United States Department of Justice (DoJ) has given the online gaming community a big, big present, made public two days before Christmas. President Barack Obama’s administration has just declared, perhaps unintentionally, that almost every form of intra-state internet gambling is legal under federal law, and so may be games played interstate and even internationally.

Technically, the only question being decided was “Whether proposals by Illinois and New York to use the Internet and out-of-state transaction processors to sell lottery tickets to in-state adults violate the Wire Act.” But the conclusion by the DoJ that the Wire Act’s “prohibitions relate solely to sport-related gambling activities in interstate and foreign commerce,” eliminates almost every federal anti-gambling law that could apply to gaming that is legal under state laws.

If the Wire Act is limited to bets on sports events and races, what other federal anti-gambling statutes are left? There are prohibitions on interstate lotteries, but Powerball and the other multi-state lotteries show how easily these can be gotten around, even before Congress passed an express exemption for state lotteries. And poker is not a lottery under federal law.

So, all that are left are the federal laws designed to go after organized crime. These all require that there first be a violation of another law, like the Wire Act, the federal anti-lottery statutes, or a state anti-gambling law. If a state has expressly legalized intra-state games like poker, as Nevada and the District of Columbia have done, there is simply no federal law that could apply.

If the bettors and operator are all in the same state, and the gambling does not involve a sports event or race, the Wire Act cannot be used against the operator, even if phone wires happen to cross into another state. And if the state legislature has made the online game legal, it does not violate any other federal anti-gambling law.

In a footnote, the DoJ expressed no opinion about the provision in the Wire Act that allows prosecutors to shut down phone lines where true interstate or foreign gambling is taking place. But, since the DoJ has now concluded that every other section of the Wire Act applies only to races and sports events, it would be truly bizarre to believe that Congress intended only this one section to apply to other forms of gambling.

This means there may be nothing preventing states from making compacts with other states, and even foreign nations, once they have legalized an online game, like poker. If Nevada and the District of Columbia want to take Internet poker players from each other, what federal law would they be violating? And, if they agreed that their residents could bet with licensed poker operators in, say, Antigua and England, while residents of those nations could bet with poker operators in Nevada and Washington, we know they would not be violating the Wire Act, or the anti-lottery laws, or any of the federal prohibitions which require that the gambling be illegal under a state’s laws.

‘STATING’ THE OBVIOUS
The immediate beneficiaries will be the D.C. Lottery and Nevada-licensed private operators, since those jurisdictions are the furthest ahead. The state lotteries in Illinois, New York and New Hampshire will also initiate or expand their online games. After all, most of the provincial lotteries in Canada are already operating Internet poker.

I believe this will be a major incentive for the other states looking at legalizing intra-state poker and other games. First will probably be Iowa. The State Legislature mandated a report, which has already been submitted, concluding that intra-state poker can be operated safely and will raise money. The Iowa Legislature meets for a short period at the beginning of the year, so it has to act quickly, or it will be passed by other states in 2012.

Those other states are California and New Jersey. California is desperate for any source of revenue, and it has so much legal gambling that the only question is which operators are going to be the big winners. The Democratic-controlled Legislature in New Jersey approved intra-state online gaming, but the bill was vetoed by Gov. Chris Christie (R-NJ). Christie understands his state need the money, so he will probably help put the issue on the ballot in November. Last month, the voters of New Jersey approved sports betting. There is no reason they would not also approve Internet casinos. It will be interesting to see if the main author, state senator Ray Lesniak (D-Union), will limit online patrons to New Jersey, as his original bill stated, or, if he will accept players from any other state and nation where Internet gambling is legal.

Once these jurisdictions open their online games, even if limited to players who are physically within the state, operators will push for compacts to allows interstate Internet poker among the legal states. And other states, like Florida, will jump on the bandwagon.

FEDERAL FUTILITY
What impact will all this have on proposed federal laws? Proponents are trying to spin the DoJ opinion. The Poker Players Alliance stated, “However, this ruling makes it even more important that Congress act now to clarify federal law, and to create a licensing and regulation regime for Internet poker, coupled with clear laws and strong enforcement against other forms of gambling deemed to be illegal.” But the reality is that Congressional advocates, like Barney Frank (D-MA) and Joe Barton (R-TX), have had some of the wind knocked out of their sails. Since states are now clearly free to legalize intra-state online poker, and perhaps even interstate, there is not as much reason to even bother with a federal law. Only the major operators, like Caesars Entertainment, need a federal law, because they don’t want to be competing with politically connected local gaming companies for limited numbers of licenses in 50 states.

Opponents, like Jon Kyl (R-AZ) and Frank Wolf (R-VA), might get some leverage for their attempts to expand the Wire Act to cover all forms of gambling. But, as I have pointed out (to the consternation of some who have donated money hoping for a federal Internet gambling law), Congress has passed literally no substantive laws since the Republicans took over the House of Representatives in January 2009. There is as little chance of this Congress passing a new Unlawful Internet Gambling Enforcement Act as there is its passing a repeal of the UIGEA.

The interesting question is what the Majority Leader of the U.S. Senate, Harry Reid (D-NV) and Kyl, the number two Republican in the Senate, will do. They had sent a letter asking the DoJ for clarification of its position on Internet gambling. They now have their answer, though it may not have been what they had wanted.

My bet is that they, and Congress, will continue to do nothing, while Internet gambling explodes across the nation, made legal under state laws.

© Copyright December 24, 2011, I. Nelson Rose, Encino, California. All rights reserved worldwide. Gambling and the Law® is a registered trademark of Professor I. Nelson Rose, www.GamblingAndTheLaw.com.

GAMBLING AND THE LAW®: Is This Rule Really Necessary?
I Nelson Rose
30 May 2015

GAMBLING AND THE LAW®: Internet Gambling? No Problems
I Nelson Rose
7 April 2015