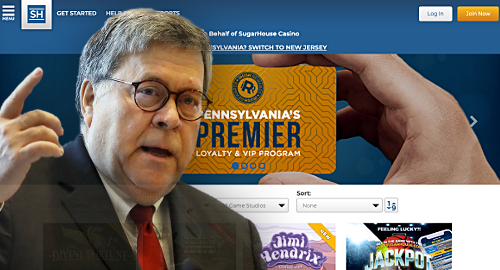 Pennsylvania’s online gambling market has only just launched and it’s already under threat by the US Department of Justice.

During the first few weeks of online availability, Pennsylvanians spent over $49.2m on the three sites, with table games ($25.5m) slightly outpacing slots ($23.7m). However, online slots revenue ($518k) beat out tables ($295k). The state has yet to record any online poker revenue.

Of the total $812,306 in online gambling revenue generated in July, SugarHouse claimed nearly $443k, while Parx ranked second with $260k and Hollywood brought up the rear with $117k.

The state’s share of July’s online revenue came to a hefty $326,700, thanks to the preposterous 54% tax on online slots and the only slightly less punitive 16% levy on online tables. Small wonder that Penn National’s incoming CEO Jay Snowden said the state’s iGaming rules made it “very difficult for anyone to make money.”

DOJ APPEALS WIRE ACT DEFEAT
All US iGaming markets are once again under threat on Friday’s news that the Department of Justice had filed a notice of appeal of a federal court ruling preventing the DOJ from implementing its harsh new opinion on the scope of the 1961 Wire Act.

But the DOJ hasn’t given up its belief that the Wire Act applies to pretty much all forms of interstate online gambling — even the kind that temporarily reroutes online data out of state — not just sports betting. The DOJ’s brief Friday filing said only that it was appealing Barbadoro’s ruling to the First Circuit Court of Appeals, which won’t resume its business until October.

The DOJ’s filing was widely anticipated, given that it comes virtually without cost to the government, as taxpayers are ultimately footing the bill. But since the chances of an appeal succeeding on its merits appear slim, it really calls into question the motivations of Attorney General William Barr (pictured) for wasting the DOJ’s resources in this fashion.

Of course, the Trump administration owes a debt to Sheldon Adelson, the Las Vegas Sands curmudgeon who hates online gambling but loves donating to Republican causes. But the US is also now led by a combed-over pumpkin who simply hates to be seen losing any fight, no matter how trivial, based on the fragility of his ego.

Then again, given Donald Trump’s blatant ignorance of most policy matters, perhaps he saw the word ‘wire’ and thought the Act has something to do with border fencing. So brace yourselves for a Trump speech in which the audience chants ‘Build The Wire’ while Trump insists that Mexican online gambling operators are going to pay the costs of enforcement.