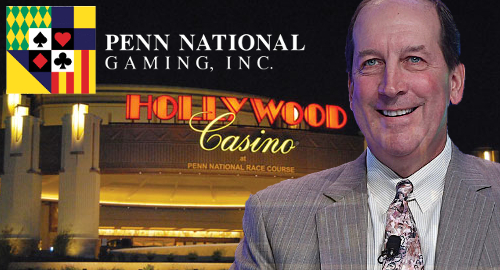 Regional casino operator Penn National Gaming (PNG) is bidding goodbye to its long-time CEO while positioning itself for US sports betting and iGaming opportunities.

PNG announced Thursday that Timothy J. Wilmott, a 12-year company vet who was named CEO in 2013, will step down as both CEO and a member of PNG’s board at the end of this year. Wilmott (pictured) will be succeeded by Jay Snowden, PNG’s president and COO, effective January 1, 2020.

PNG underwent significant changes under Wilmott’s watch, including the creation of the first (but by no means the last) casino real estate investment trust (REIT), as well as the blockbuster acquisition of Pinnacle Entertainment and the company’s ongoing push into iGaming and sports betting.

Wilmott also serves as the current chairman of the American Gaming Association, and will reportedly continue in that role until year’s end. Wilmott was appointed AGA chair in late-2017, following the exit of MGM Resorts CEO Jim Murren.

REVENUE UP, PROFIT DOWN
As for PNG’s Q2, the company’s revenue was up 60% to $1.32b thanks to the Pinnacle contributions and a partial contribution from Detroit’s Greektown Casino (the deal officially closed in mid-May).

Adjusted earnings rose nearly two-thirds to $406.5m, but lease payments to that pesky REIT brought that earnings figure down to $191.6m, a 46% year-on-year gain. And net income fell by $2.6m to $51.4m on acquisition and restructuring costs.

The PNG-Kambi pairing will act as the primary license or skin in each of the 19 states in which PNG has a presence (and where local rules permit) and Snowden said the deal was “all about control.” Retaining that primary license allows PNG to “control our future, today for sports betting, tomorrow for iCasino,” two products that Snowden believes will be “inextricably linked to one another” in most states.

Snowden said PNG continued to talk with “a number of significant sports media companies and European operators” regarding potential betting tie-ups. Snowden teased the fact that analysts “should not expect [PNG’s betting strategy] to be only what you know today, there’s other irons in the fire and more to come.”

Snowden added that just because early movers like FanDuel and DraftKings are dominating online betting in New Jersey didn’t mean “you got to be in it now and first to market.” Snowden called sports betting “a marathon” and predicted that “the scoreboard is going to look a bit different three, four years from now.”

PNG will have 14 retail sportsbooks in action by September 1 – including three properties in Indiana and Iowa – but Snowden said the company wasn’t assuming “any significant pickup” from its betting operations in its H2 guidance.

DON’T EXPECT MUCH FROM PENNSYLVANIA iGAMING
PNG is also prepping its “full iCasino” launch in Pennsylvania on August 15, but here too, Snowden cautioned that it would “very difficult for anyone to make money as an online operator when you’re paying over 50% tax rate [specifically, 56%] on gross for slots.” Snowden said PNG was treating its Pennsylvania online casino operation as “an opportunity for us to kick-start our iGaming effort and learn.”

Snowden said there might be more of an opportunity to make money via online table games, poker and sports betting, although he noted that the tax rate on online betting (36%) is “also very, very aggressive.” As such, Snowden reiterated that Pennsylvania was “more about learning and building out our capabilities, our resources and our team, and will be ready for future states as they launch.”