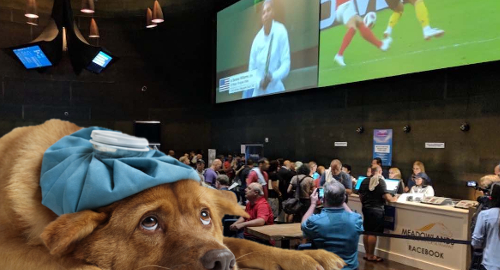 New Jersey’s sports betting revenue hit a new monthly low for the year to date, reflecting the end of both basketball and hockey playoffs.

The official figures released Friday by the New Jersey Division of Gaming Enforcement (DGE) show the state’s licensed betting operators generated revenue of $9.7m in June, down from $15.5m in May and from $21.2m in April. Total revenue over the first six months of 2018 is $113.1m, reflecting a 5.7% hold.

As usual, the Meadowlands racetrack and its FanDuel and Pointsbet partners led June’s betting revenue chart with $4.38m, with $2.72m of that total coming via digital channels. Though June’s total was only half that of May’s, the Meadowlands’ wagering revenue through the first half of 2018 stands at an impressive $57.85m, nearly twice as much as its nearest competitor.

That runner-up would be Resorts Digital, whose partners include DraftKings and The Stars Group’s BetStars brand, and their combined revenue hit $2.68m in June (plus $34k from Resorts Casino Hotel’s land-based book). For the year-to-date, Resorts Digital’s betting total is $29.44m.

The Monmouth Park racetrack ranked third with $1.24m ($718k via digital), while the Ocean Casino Resort maintained its fourth place spot from May despite revenue rising over 60% to $972k. The Golden Nugget placed fifth with $153k, while no other Atlantic City casino managed to post a six-figure result, and the Hard Rock Atlantic City posted a net loss of $4,255 for the month.

New Jersey’s legal betting market launched midway through June 2018 with only a handful of operators, but those three operators offer us the market’s first year-on-year comparisons. Monmouth Park’s June 2019 result was 45% below the same month last year, while the Borgata tumbled 93.4% over that same span. Ocean Casino Resort was the lone gainer, quintupling its $192k take from June 2018.

Economies come back to life, but don’t get too optimistic
Rafi Farber
1 hour Ago