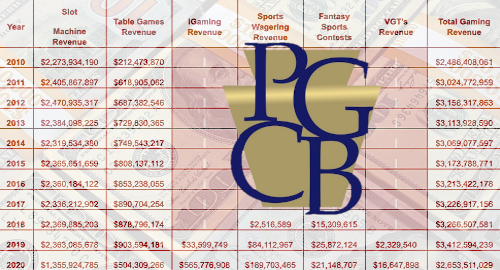 Pennsylvania’s gambling operators set new monthly records for online casino revenue and sports betting handle in December 2020, although it wasn’t enough to rescue the market from posting its first full-year revenue decline since 2014.

Figures released Tuesday by the Pennsylvania Gaming Control Board (PGCB) show statewide gaming revenue of just $168.7m in the month of December, a 42.2% decline from the same month last year and the third straight month of sequential declines.

Pennsylvania Gov. Tom Wolf ordered the state’s casinos to close in mid-December in a bid to halt the further spread of COVID-19. As a result, December’s land-based slots revenue was down 77.5% year-on-year to $42.2m, while land-based table games fell 78.2% to just over $17m.

Penn National Gaming and its Barstool Sportsbook claimed the largest share ($13.9m) of December’s betting revenue despite ranking a distant third on the handle chart ($72.5m). Compare that to handle leader Valley Forge and its FanDuel partner, which claimed revenue of $7.3m from handle of $209.2m, while Meadows Casino (DraftKings) earned $5.4m from total wagers of $131.5m.

At any rate, the net result of all this online action was Penn National’s Hollywood Casino claiming December’s overall revenue crown with $42.4m, well ahead of runner-up Parx Casino’s $23.3m and third-place finisher Valley Forge’s $21.7m.

2020 STILL A DOWNER
For 2020 as a whole, total statewide gaming revenue hit $2.65b, a significant tumble from 2019’s $3.4b and the first year of negative growth since 2014. With Pennsylvania’s casinos shut for nearly one-third of 2020, it’s clear the picture would have been far worse had the casinos’ digital offerings not been available.