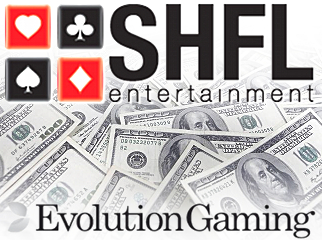 US gaming device maker SHFL Entertainment has inked a deal to supply some of its specialty casino table games via European live-dealer online casino stalwarts Evolution Gaming. The deal allows Evolution to offer two of SHFL’s Proprietary Table Games, with more coming before the year’s out, to Evolution’s customers in regulated online gambling markets. PC and iPad versions will launch simultaneously, allowing brick-and-mortar casino operators to offer their customers a live-dealer casino experience in their hotel rooms or by the pool (where local regulations permit). Evolution CEO Jens von Bahr said the deal “positions us perfectly to lead the exciting new online markets, including emerging regulated markets” like the US and Canada.

SHFL’s own online division has yet to generate any revenue, as CEO Gavin Isaacs copped to being “slightly behind” schedule in getting its digital ducks in a row. As Isaacs noted to analysts last week, “frankly, it’s difficult to recruit some of the people you need for this business.” In fact, hiring online staff is credited with half the extra $1.2m SHFL spent on R&D in its most recent financial report. Isaacs said SHFL had expected its online division to break even this year, but now expected “to make a small loss this time whereas that revenue will come through following and just gear up afterwards.”

SHFL has built its own bespoke online platform, and integrating it with companies such as Amaya Gaming and the GameAccount Network is an “extensive” proposition due to the “unique nature of each operator’s platform.” But Isaacs says the servers are ready, the licenses are in place and Nevada-approved testing lab Gaming Laboratories International has already okayed four of the 14 real-money games SHFL plans to offer.

While the online division may not be anteing up, SHFL’s traditional slots and shufflers biz posted record revenue, earnings and profits for the three months ending April 30. SHFL’s fiscal Q2 saw revenue up 17% to $77.4m, earnings up 7% to $25.4m and profits up 22% to $11.8m. Electronic gaming machine (EGM) shipments rose 14% to 1,192 units, buoyed by demand from Asia and Australia, while EGM revenue rose 16% to a record $25.7m. Expenses were also up $4.1m to $23.9m thanks to $1.3m in legal costs largely spent on “protecting and defending the Company’s valuable intellectual property.” SHFL has been locked in a multi-year patent squabble with Asian gaming device maker LT Game, although there are signals that a settlement may be in the works.