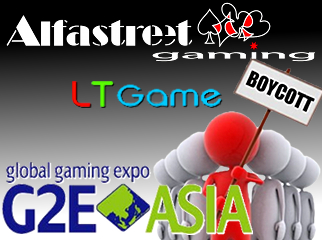 Slovenian gaming device maker Alfastreet has announced it will not attend this month’s Global Gaming Expo (G2E) Asia over concerns that displaying its wares on the convention floor could result in legal action by a competitor. Alfastreet was one of four equipment makers – the others being SHFL Entertainment, F2 Systems and Interblock – hit with an injunction by Paradise Entertainment subsidiary LT Game at last year’s G2E Asia, based on LT Game’s assertion that it holds a Macau-issued patent on electronic multi-game terminals involving live-dealer baccarat. The serving of that injunction sparked a heated argument between Macau officials and G2E organizers, including American Gaming Association president Frank Fahrenkopf.

Following last year’s incident, Alfastreet marketing and sales manager Albert Radman said the company would seriously question returning to G2E Asia if it couldn’t exhibit its full product line. Last week, Radman confirmed that Alfastreet would be skipping the event, telling Yogonet.com that LT Game’s patent “would not hold water in any market other than China. You cannot patent a concept … it’s like someone patenting roulette. It’s nonsense and we are really disappointed that no one can do anything about it.”

LT Game’s aggressive defence of its patent rights has sweeping ramifications in a market like Macau, where electronic table games (ETG) are increasingly popular with both players and casino bosses. A new report by Union Gaming Research says the Macau ETG market will grow from its present 4,800 seats to 6,500 within the next five years. Six companies – LT Game, SHFL, Alfastreet, Interblock (50% owned by Australia’s Aristocrat Leisure), Kazuo Okada’s Aruze Gaming and Novomatic – control over 90% of the ETG market, with LT Game tipped as having over half of Macau’s ‘stadium’ style ETGs.

So-called ‘stadium’ multiplayer ETGs – which feature 50 to 60 player seats and electronically handle betting and settling, requiring only one or two actual dealers – count as a single gaming table, allowing casinos a way to get around Macau’s table cap without incurring the wrath of gaming regulators. Stadium ETGs also allow for more hands per hour and a higher volume of wagers per hand, resulting in a higher earnings margin than traditional live mass-market table games (45% v. 40% respectively). Union Gaming says this equated to 58% higher earnings per day in 2012. Clearly, LT Game won’t give up control of this market without a fight.