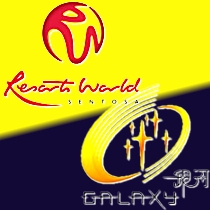 The Casino Regulatory Authority of Singapore (CRA) has renewed the gaming license of Genting’s Resorts World Sentosa (RWS) facility. The new license, which takes effect Feb. 6, is valid for three years. Despite the number of fines the CRA has levied against RWS over the past three years for violating social safeguards, the CRA stated that RWS’ compliance record was a factor in its decision to renew. That said, the CRA has imposed additional requirements on RWS to install “more robust structures and processes aimed at strengthening its overall compliance of our laws and regulations.” RWS released a statement detailing its glee over the renewal, its pride for having created 13k jobs and for making significant economic and tourist contributions to Singapore.

GALAXY TO GET 50 MORE GAMING TABLES, THEN THAT’S IT FOR 2013
Over in Macau, Secretary of Economy and Finance Francis Tam Pak Yuen informed the media on Thursday that the enclave plans to authorize only 250 additional gaming tables in 2013. With 200 of these tables having already been assigned to Sands China’s Sands Cotai Central, that leaves just 50 tables, and Tam says these have been earmarked for Galaxy Entertainment Group’s Galaxy Macau casino on the Cotai strip. Everybody else will have to wait until next year. Despite suggesting earlier this month that the enclave’s table cap had a little wiggle room, Tam says the government is determined to stick with its plans to increase the number of tables by just 3% (on average) annually until 2013. The additional 250 tables will bring Macau’s total to around 5,750.

The guys running Sands and Galaxy know how lucky they are to be able to expand their Macau operations by any percentage. Speaking to Al Jazeera, Sands China CEO Ed Tracy remarked on the contrasting fortunes of Las Vegas Sands’ operations in Nevada and Macau. “[Las Vegas] will never see the kind of revenue generation that you see [in Macau] … because it sits right next to the biggest market in the world, that being mainland China. There happens to be a great history of gaming in China and there is an undeniable propensity for our Chinese customers to spend time in a casino. ”

Galaxy vice-chairman Francis Lui says that for Chinese consumers, “after buying a property, buying a car, and eating good food, have clothes to wear, the next thing they really want is leisure and entertainment. And Macau is in a very unique position being the only city in the entire China where we allow gaming … The wealthy middle class in China is becoming bigger and bigger.”

STANLEY HO MAKES WAY FOR SON LAWRENCE, GIVES DAUGHTER A $55M MANSION
Stanley Ho, who effectively controlled gaming in Macau prior to the enclave opening up to Western operators in 2002, has either stepped down from or been pushed off of China’s top advisory body, the Standing Committee of the Chinese People’s Political Consultative Conference. Sources told Chinese newspaper Va Kio that the 91-year-old former SJM Holdings Ltd. titan’s name had been left off the list of candidates, but that Ho’s son Lawrence Ho, co-CEO of Melco Crown Entertainment, would be nominated as Macau’s delegate on the Committee.

Meanwhile, Hong Kong’s Face magazine claims Stanley’s daughter Florinda has accepted a marriage proposal from TVB actor Joel Chan, and that Stanley gave the happy couple a HK$430m (US $55.4m) mansion as part of her ‘dowry.’ Hey, the guy’s 91; it’s not like he can take it with him.