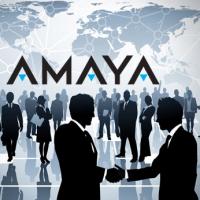 Amaya Gaming Group, Inc., the Canadian-based owner of the Ongame Poker Network, has reached a deal with SHFL Entertainment Inc., with the former giving license to the latter to become the exclusive distributor of the Ongame software platform within the US.

The announced deal will encompass a time of ten years with a $10 million payment for the rights to market the Ongame Network, as well as a $2 million payment from SHFL, the parent company of Shuffle Master, to Amaya that would give the former rights to offer Amaya’s Ongame Poker and AGP casino-games content to its clientele. The deal also includes an $8 million kicker that will come in play once online poker becomes regulated at the US federal level or in California where there has been talk of resuscitating the state’s poker bill in January next year. But in the event that online gambling legislation becomes a states issue – as what appears to be the case now that the Reid/Kyl bill has been dropped – the $8 million kicker will be prorated on the basis of the aggregate population of that states that pass its own legislations.

Both companies stand to gain a lot from this new partnership, something that wasn’t lost on either party when the deal was announced. For SHFL, it gives them an online-service portfolio with Amaya Gaming Group.

“Free-to-play and social casino offer an exciting immediate opportunity for collaboration with Amaya,” said Louis Castle, SHFL’s Chief Strategy Officer. “The U.S. online poker market is also very promising and we are thrilled to have the opportunity to work with Ongame, whom we have always believed has the best technology available for online B2B poker.”

Conversely, the Canadian-based company now has what can be best described as an express ticket on the “approval line” in a lot of the interactive markets that are expected to rise in the US. Considering that SHFL carries enormous market penetration consisting of over 3,000 corporate customers all over the world and carries the kind of clout and experience in dealing with gaming regulatory regimes, we’d say that Amaya has a pretty sweet deal on their hands.

“All US deals will go through SHFL, which gives Amaya/Ongame leverage and licensing knowledge,” said Carl Zide, Ongame’s Communications Manager. “Ongame is already one of the leading providers on regulated markets, so we can go live as soon as our partners are ready.”