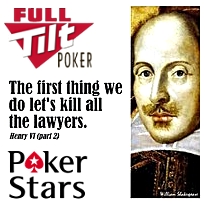 Monday’s deadline for the most recent extension granted by the US Department of Justice in its legal actions against the online poker companies and individuals named on Black Friday brought a flurry of legal filings. These included motions by Full Tilt Poker (FTP) principals Howard Lederer and Rafe Furst to dismiss the civil complaint against them on grounds that (a) the government failed to prove a case for fraud and (b) FTP’s actions were not covered under the Illegal Gambling Business Act (IGBA) cited in the complaint. As expected, a carbon-copy motion to dismiss by FTP board member Chris ‘Jesus’ Ferguson has since joined Furst and Lederer’s on the public record.

PokerStars has also joined the filing fray, submitting its own lengthy motion to dismiss the amended civil complaint. As with their FTP counterparts, Stars’ attorneys cite the “vagueness” of the DoJ’s allegations and the inapplicability of the IGBA. Stars also takes issue with the DoJ’s attempt to compel Stars to forfeit the entirety of its worldwide assets as penalty for its alleged dirty dealings, especially since Stars asserts that the DoJ itself has “implicitly conceded” that Stars’ business outside the US was entirely above board. Stars says the DoJ has made no attempt to distinguish between Stars’ rest-of-world activities with what the DoJ alleges were illegal activities in the US, making the DoJ’s claim a classic case of overreach.

Not to be outdone, the DoJ filed its own motions to dismiss outstanding claims against FTP and Stars by (a) a class action brought by an aggrieved bunch of former FTP players and (b) Cardroom International’s ‘we coulda been a contendah if companies like Stars weren’t so much better at this stuff than us’ nuisance suit. With Stars rumored to have been close to a deal to acquire FTP’s assets and refund FTP’s former players’ deposits, the DoJ’s motions can be viewed as a necessary step toward assisting that process by ensuring FTP’s assets are unencumbered by any claims. How the Stars’ motion to dismiss might affect its (rumored) negotiations with the DoJ regarding this acquisition remains unclear.

PROSECUTORS URGE LENIENCY FOR BRENT BECKLEY
In other Black Friday legal news, the DoJ has doubled down on its plea for leniency in the sentencing of Absolute Poker (AP) co-founder/head of payment processing Brent Beckley. Beckley turned himself into US authorities shortly before Christmas, and prosecutors had recommended he face no more than 12-18 months in stripes for his role in AP’s dealings with US poker players. In May, Judge Lewis Kaplan suggested he was leaning towards an “upward departure” from those sentencing guidelines. Last Tuesday, prosecutors filed a fresh sentencing submission, in which they argue that Beckley’s “prompt and fulsome acceptance of responsibility” as well as some folderol regarding his “compelling account of childhood hardship” makes the 12-18 month term not unreasonable.

Interestingly, the filing notes that there is “no evidence that Beckley intended to cause ultimate financial losses to banks, and no banks have identified for the Government actual losses attributable to Absolute Poker processing.” Swap out AP’s name for PokerStars in that statement and you have the gist of Stars’ ‘no harm, no foul’ argument. That’s an argument that Stars players, who were promptly reimbursed following Black Friday, would likely agree with, unlike, say, AP’s former players, who saw their deposits flow through Beckley’s hands to… well, they still don’t know. One assumes Isai Scheinberg is rehearsing a ‘my puppy got run over by a milk truck’ monologue to allow his attorneys to cite their own “compelling account of childhood hardship” in future filings.