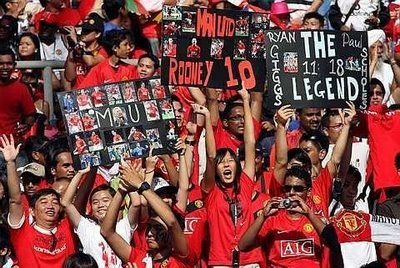 Manchester United are reportedly set to embark on a Initial Public Offering (IPO) in the Far East that will see them raise an estimated $1billion (£600m). As part of the plans, the Glazer family will give up around 20-30% of the club to the Singapore stock exchange. It represents a substantial part of the club that the family are thought to value at close to £2billion in total. It goes to show the increasing influence that the Far East has and continues to enjoy in relation to the English Premier League.

It’s no coincidence that of the 20 teams competing in this season’s Premier League, a quarter are sponsored by companies gearing themselves almost exclusively to the Asian market. Apart from Chang Beer’s sponsorship of Everton, Genting (Aston Villa), 188BET (Bolton), Bodog (West Brom), and 12Bet (Wigan), all are part of the burgeoning Asian gaming industry that continues to thrive.

United’s IPO will be in one of the locations that is currently experiencing huge growth in the casino business to the extent that it is set to surpass Las Vegas in the near future. For a country with two licensed casinos that is huge. The clamor for one of the world’s biggest brands will be huge in this part of the world and the gaming industry could reap even more benefits from the UK’s biggest club becoming even more visible in the Far East.

It isn’t just United who have looked at Asia and wanted a piece of the pie on offer. Five Premier League sides (Arsenal, Aston Villa, Blackburn, Chelsea, Liverpool) toured Asia as part of pre-season preparations and were clearly targeting more of a foothold in the Far East market.

Watching the past weekend’s first set of Premier League fixtures, it was easy to tell that the influence Asia is having over the world’s most exciting soccer league. A sight synonymous with almost every stadium at the weekend was the presence of advertising of at least one Asian gambling industry company. 12Bet’s scrolling advertising was a presence at most grounds and the fact it was almost entirely non-English advertising it tells you what you need to know. Forget Ray Winstone at Bet365. This is where the real money was being made over the weekend.

More information is expected on the IPO when the club reports its annual results in October. It is then that clarification will be given as to whether the club’s presence in Asia will be further strengthened.