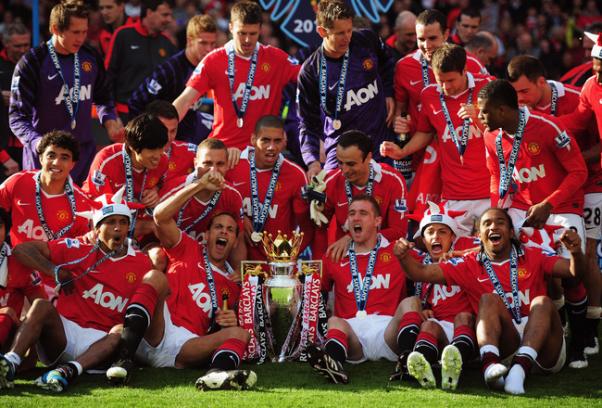 The lowdown: Not only have United strengthened over the summer, they’ve also managed to keep hold of the entire championship winning team from last term. No Wayne Rooney departing to see how many birds he can shag on the continent. Dimitar Berbatov hasn’t gone to join the French resistance at PSG. It’s all just as it was save Edwin van der Sar retiring at the ripe old age of 456. Spanish hotshot David De Gea has taken the elder statesman’s place and the additional signings of Ashley Young and Phil Jones give the champions sufficient strength in depth at most positions.

As far as scoring goals, there are three candidates to fill two positions. This won’t be a problem early in the season as Javier Hernandez has succumbed to injury. Wayne Rooney and Berbatov start off the season up top. It should stay that way if you look at the goalscoring charts. There’s something Fergie doesn’t like about Berba though. Whether that will continue this season only he knows.

Star man: Wayne Rooney (Striker) – Much like Drogba at Chelsea on his day he’s simply unplayable. How long into the season this is the case only he knows.

One to watch: Tom Cleverley (Midfield) – With Scholes now retired the youngster could step into the void and show why he received rave reviews at Wigan last term.

Expected finish: Even with all the strengthening this summer they could finish up behind their neighbors. 2nd.

Click the links for season previews of Chelsea, Arsenal and Man City, Liverpool and Tottenham, Everton and Fulham, Sunderland and Aston Villa, West Brom and Newcastle, Stoke and Bolton, Blackburn and Wigan, Norwich and QPR and Swansea and Wolves.