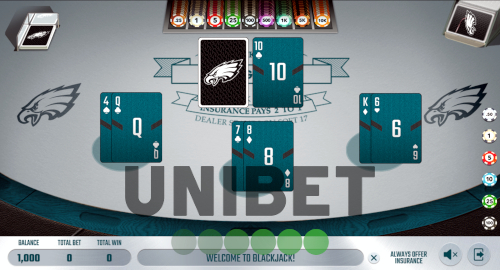 On Monday, Kindred announced that its Unibet brand’s Pennsylvania-licensed site had launched a blackjack product featuring a Philadelphia Eagles ‘theme,’ in what the operator described as “the first professional sports themed casino games ever in the US.”

The Eagles Blackjack product has already gone live for Pennsylvania customers, while a similarly themed Eagles Online Slot will make its debut exclusively on Unitbet’s Pennsylvania site before the year is through.

Kindred’s senior VP US Manuel Stan hailed his company helping to blaze an online casino sports branding trail and promised the tie-up was “just the beginning” for Unibet’s US-facing operations. Eagles senior VP of revenue & strategy Catherine Carlson was equally ebullient, calling Unibet “a forward-thinking partner” that was helping to take the tandem “to a whole new level.”

Last week, Kindred expanded its existing online casino deal with the Eagles, which was signed last November, to become the team’s latest Official Sportsbook Partner. The Eagles have similar betting tie-ups with DraftKings and FOX Bet.

Meanwhile, the Indianapolis Colts have signed the NFL’s first betting partnership with the partnership of casino operator Caesars Entertainment and the US division of UK bookmaker William Hill. The Colts previously signed a similar deal with betting operator PointsBet and a daily fantasy sports partnership with FanDuel.

Caesars and William Hill are in the midst of a proposed merger/acquisition – Hills announced Monday that its shareholders will get to vote on the deal on November 17 – which will require a nod from Indiana gambling regulators. Both Caesars and Hills are currently approved to offer wagering in Indiana but the plan is to launch a ‘Caesars Sports Book by William Hill’ betting app once regulatory approvals are go.

The rebranded app will integrate with the Colts’ media and marketing efforts, while the Caesars Rewards loyalty program sponsor a free-play ‘predictor’ game on the Colts Mobile App, with prizes for weekly winners as well as the chance to win trips to Las Vegas with bookings at a Caesars casino hotel.