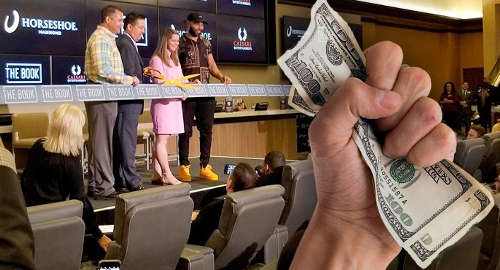 Indiana’s first month of legal sports betting got off to a flying start while the Indianapolis Colts struck a partnership with betting operator FanDuel that doesn’t involve actual betting.

On Thursday, the Indiana Gaming Commission (IGC) released September’s gaming revenue figures for the state’s 13 brick-and-mortar casinos and off-track betting parlors. The figures are the first since the state launched its legal wagering market, which for September involved only land-based sportsbooks.

September’s combined wagering handle hit $34.5m, a decent showing given that the state has less than 7m residents and bettors had to hoof it down to their closest gaming venue to book their bets. Football was the dominant betting sport, claiming $20.7m of September’s total, with parlay wagers adding nearly $9.8m and baseball third with over $3.4m.

Hammond also topped the betting revenue chart with nearly $2.1m, while there was a three-way dogfight for second place led by Harrah’s Hoosier Park ($1.3m), Ameristar ($1.275m) and Lawrenceburg ($1.235m), although it bears mentioning that the Hoosier Park figures include contributions from several OTBs in the area.

Indiana’s sportsbooks claimed a total of $8.5m in betting revenue in September but the IGC has decided to complicate the process of determining a statewide betting hold percentage by including futures bets in betting handle. Regardless, it’s a strong showing by the books and/or a sad comment on the inability of Indiana bettors to pick a winner.

Caesars regional president Dan Nita told the Chicago Tribune that the launch of the Hammond Horseshoe’s sportsbook led to a 10% rise in daily attendance and the casino’s food & beverage revenue also enjoyed “upticks.”

DraftKings’ rival FanDuel is already taking wagers in Indiana via its Boyd Gaming partnership and its online launch is expected any day now. The company announced Thursday that it had signed on as the new Official Fantasy Sports Partner of the Indianapolis Colts, allowing it to promote its DFS product via in-stadium signage and digital, radio and TV channels for the remainder of the 2019-20 NFL season.

While the Colts deal is strictly for daily fantasy sports, FanDuel’s sports betting product is only a click away for Indiana DFS players, so chalk this up as another stealth marketing advantage over FanDuel’s non-DFS betting rivals. Rival DraftKings inked a league-wide DFS partnership with the NFL last month. The NFL has yet to sign up a North American wagering partner, although it has struck such a deal with Aussie operator Tabcorp.