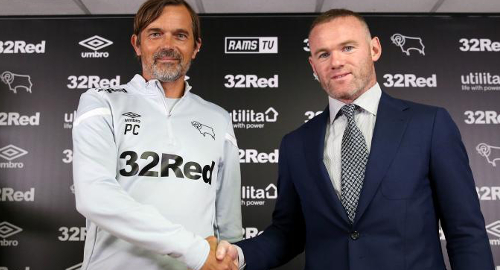 Earlier this week, English Football League Championship side Derby County announced that football great Wayne Rooney was returning from his self-imposed exile in America to become a player-coach for the Rams on an initial 18-month contract starting in January.

While the return of England’s and Manchester United’s all-time goal scorer would be news enough on its own, the “record-breaking” sponsorship deal that Derby County apparently worked out with Kindred’s 32Red brand ahead of Rooney’s signing was all anyone wanted to talk about.

The impact of the online casino’s input into the deal became evident when the Rams let it be known that Rooney would wear #32 when he stepped out onto Pride Park’s pitch next year. Rooney was nonplussed by the number, saying whatever digits were on his shirt weren’t “a big deal” to him, but the usual media suspects and the Labour party are saying Rooney might as well be wearing #666 for all the evil the Rams will inflict on UK society via this deal with the gambling devil.

Labour’s shadow sports minister Rosena Allin-Khan told The Times that gambling’s hold on football was “now so out of control, we are seeing the names of players becoming synonymous with gambling brands.” Allin-Khan reiterated her party’s pledge to eradicate any ties between gambling and the game – and lots of other gambling-related sins – should Labour ever get back in power.

Kindred’s Derby move is certainly audacious, considering the current trend that has seen the company’s rivals literally giving away their football shirt sponsorships. GVC Holdings recently gifted 42 UK football sponsorships to responsible gambling charity GambleAware while Paddy Power has been sponsoring clubs so as to not put their logo on the shirts.

As a mitigating factor, 32Red was in the top-seven of UK-facing gambling operators in terms of money contributed to GambleAware in its most recent fiscal year. 32Red donated £384k to the charity, only £6k behind National Lottery operator Camelot, and three times as much as Sky Bet’s new owner The Stars Group.