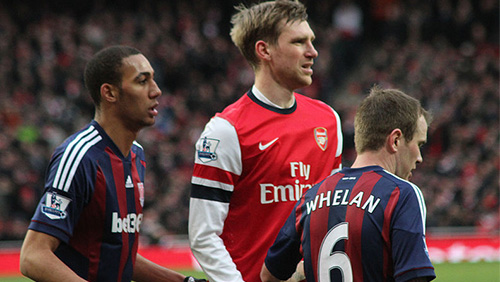 The English Premier League (EPL) is one of the most well-known soccer leagues in the world. As such, it is always a favorite with companies looking to spread the word on their products and services, and with international interest in gambling at an all-time high, gambling companies are turning to the sport more than ever to create new sponsorships. Across the league, exactly half of the teams are now sponsored by gambling entities.

The EPL has been on a winning streak in more ways than one. As its popularity remains high, it has enjoyed record-breaking revenues from gambling sponsorships in each of the past 10 years. For the upcoming season, the 20 teams in the league will pocket a combined $435.8 million just for sporting a gambling logo on players’ jerseys. This amounts to an increase of $41.8 million from last year.

Leading the gambling industry sponsorships is Betway out of Malta. It is spending $12.5 million to put its brand on West Ham jerseys, followed by Sportpesa out of Kenya, which is sponsoring Everton to the tune of $12 million.

Notably, the sponsorships don’t necessarily represent companies operating in the U.K. Many look to advertise gambling operations in areas where the activity hasn’t become as restricted as it is in the EPL’s backyard. Mansionbet is a perfect example. It is licensed to offer gaming in the U.K. and has been a sponsor of EPL teams for years, but is marketing its M88 arm, a brand that targets Asian players and which is not available in the U.K.

Some U.K. lawmakers that have been pushing for a larger reduction in gambling advertising have failed to make this connection. Tom Watson, the Deputy Leader of the Labour Party, told The Guardian this week that it is illogical to see the country’s gambling industry agree to reduce advertising in soccer, while gambling sponsorships are increasing. He stated, “The time for warm words is over. Either the industry is going to act in good faith, or we will need stricter regulation of gambling advertising — starting with a ban on football shirt sponsorship.” Watson should probably brush up a little more on the type of advertising found on jerseys.

Possibly expecting some type of blowback from the gambling sponsorships, Paddy Power has taken the initiative to make the activity less transparent. It has launched a campaign — the Save Our Shirt Campaign — which sees sponsorships take place, but without a logo being placed on the jerseys.

Paddy Power now has four teams involved in the campaign — Motherwell, Hudderfield Town, Southend United and Newport County. The sports gambling company sponsors the teams, but isn’t taking advantage of the deals to put any type of branding on the players’ uniforms.

The company has stated in relation to the campaign, “As a sponsor, we know our place — and it’s not on your shirt.”