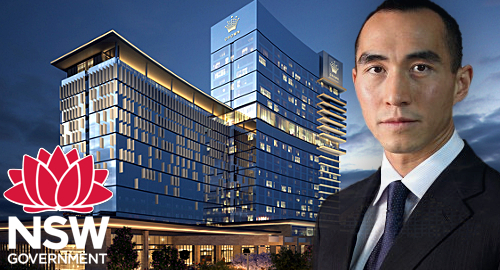 Asian casino luminary Lawrence Ho might not get his hands on 20% of Australian casino operator Crown Resorts after all.

In May, Ho’s Melco Resorts & Entertainment (MRE) announced that it had struck a deal with Crown’s largest shareholder James Packer to acquire 19.99% of the company at a price of AU$1.76b (US$1.22b). But new revelations by Australian media may have thrown a monkey wrench into the regulatory approval process.

On Thursday, the New South Wales Independent Liquor & Gaming Authority (LGA) announced that it was conducting an inquiry into the share sale, half of which was transferred to MRE’s control on June 6. Crown issued a brief statement in response saying it would “fully cooperate in relation to this inquiry.”

While the LGA said the inquiry was prompted by the evidence uncovered in the joint investigation of Crown by 60 Minutes, The Age and The Sydney Morning Herald, the real trigger here appears to be documents filed with the Hong Kong Stock Exchange showing that until June 28, Ho was a director in Lanceford Company Ltd, one of 59 entities with which Crown was barred from conducting business.

Lanceford was a holding company that held the majority of assets formerly belonging to Ho’s father Stanley Ho, including Macau’s original casino operator SJM Holdings. In 2014, as Crown was pursuing a NSW license for its Crown Sydney casino, the LGA made it a condition of Crown’s license that the company have nothing to do with Stanley, due to past allegations of his ties to Hong Kong’s triads.

In addition to SJM, the forbidden Lanceford list also includes the Shun Tak Holdings conglomerate, which operates a ferry service that MRE employs to bring gamblers to Macau from Hong Kong. Lawrence Ho (pictured), who said in June that he welcomed regulatory scrutiny of the Crown share sale, has yet to comment on the LGA probe.

Crown was already the subject of multiple probes looking into the joint investigation’s allegations. The probers include gaming regulators in the state of Victoria, the Australian Criminal Intelligence Commission and the Australian Commission for Law Enforcement Integrity.

Undaunted, Crown insisted that it was the victim of “a deceitful campaign” based on “unsubstantiated allegations, exaggerations, unsupported connections and outright falsehoods.”

Despite the seemingly never-ending stream of negative media, Crown’s shares closed up 1.2% to AU$11.56 by the end of Thursday’s trading. That said, the shares were worth AU$12.07 at the start of the week, and were worth AU$12.70 before the 60 Minutes episode aired.