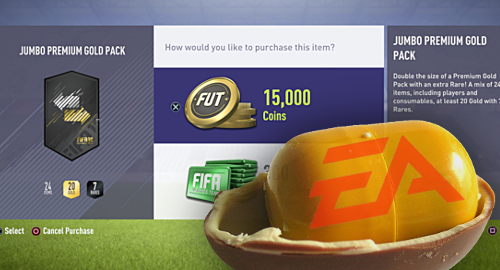 A senior exec at video game publisher Electronic Arts (EA) has shown a remarkably tone-deaf understanding of the controversy surrounding ‘loot boxes’ as well as the increasingly intolerant attitude toward gambling in the UK.

On Wednesday, EA’s VP of legal and government affairs Kerry Hopkins told the UK’s Digital, Culture, Media, and Sports committee that the loot boxes in popular EA titles were “quite ethical and quite fun, quite enjoyable to people.” Hopkins went on to describe loot boxes as “surprise mechanics” that she claimed were akin to the mystery-toy-inside-chocolate Kinder Eggs product.

For the uninitiated, loot boxes contain randomly selected virtual goods that can help players advance their game-play. The contents of these boxes, which can be purchased with cash or virtual currency (which is purchased with real cash), remain a mystery until they’re opened.

A growing number of players complain that advancing in the games is increasingly difficult without items obtained via purchasing loot boxes. Meanwhile, a growing number of governments have expressed concerns that loot boxes are a form of gambling, given that players pay money to win a prize based on a random outcome.

Hopkins said EA agreed with the UK Gambling Commission (UKGC) and regulators in other jurisdictions that loot boxes “aren’t gambling” while the company disagreed “that there’s evidence that shows [loot boxes] lead to gambling.” Asked whether EA had any ethical qualms regarding loot boxes, Hopkins said EA had “no qualms that they’re implemented in an unethical way.”

But Hopkins stuck her foot in by telling Labour MP Ian Lucas that EA didn’t think it necessary to establish the age of its players. Hopkins further claimed that “I don’t think this is the place to discuss” whether game publishers had a legal responsibility to protect players from potential harm via gaming products, to which Lucas retorted: “We’re the House of Commons. This is exactly the place.”

While the UKGC has so far determined that loot boxes fail to meet its definition of gambling, the regulator was a signatory to a 2018 letter that warned of the “blurring lines between gambling and gaming.” What’s more, UK politicians and the media are increasingly intolerant of anything resembling gambling, particularly if it involves children.

EA is clearly fighting a rear guard action here. In January, the company agreed to remove loot boxes from its FIFA game for players in Belgium, which has led the charge against loot boxes. EA originally resisted this change, adding a qualifier that listed the odds of a loot box containing a truly valuable virtual item, but Belgian regulators weren’t sufficiently impressed.