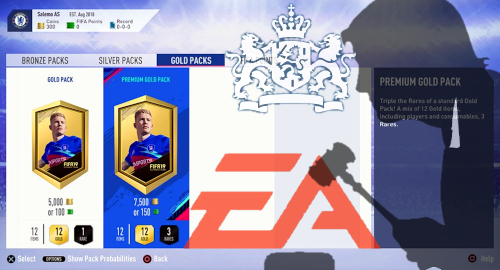 On Thursday, the District Court of The Hague issued a ruling upholding an administrative order issued last year by the Kansspelautoriteit (KSA) gambling regulator that imposed penalties of up to €10m on EA for offering so-called ‘Packs’ in the company’s FIFA football video game.

The KSA’s 2019 order came after it concluded that EA’s loot boxes were an illegal game of chance under Dutch gambling regulations due to the random value of the contents, as well as the fact that the virtual items could be traded or sold for real-world currency on third party sites.

The KSA ordered video game companies to amend their products to ensure compliance with Dutch law, but neither EA nor its Electronic Arts Swiss Sàrl subsidiary complied. As a result, the KSA issued a ‘cease & desist’ order against the two EA firms, making them liable for penalties of up to €5m each.

The KSA justified the stiffness of the penalties due to its view that video games have particular appeal for kids and young adults who may be more susceptible to developing problem gambling behavior.

The Court rejected EA’s appeal of the KSA’s penalties, finding that the outcome of paying for a ‘Pack’ is “only determined by chance; the players do not have a predominant influence on the content of the Packs and no dexterity is required to participate.”

The Court dismissed EA’s attempts to mitigate this view by noting that Pack contents could be utilized within FIFA game play and that there was a “certain degree of transparency” about the odds of winning a particularly valuable/useful virtual item by opening a box.

The Court further rejected EA’s argument that there was ‘no direct convertibility’ of Pack contents to real-world cash, noting that virtual elements won through opening a Pack could be exchanged with other players for in-game FUT virtual coins, which “can be converted to FUT points and then to euros.”

The Court also dismissed EA’s arguments that the KSA was required to prove that loot boxes are addictive, noting that Dutch gambling law “does not require separate scientific confirmation per game of chance.” To the contrary, the Court concluded that EA bore the burden of demonstrating “that the identified risk potential does not exist with Packs.”

As for EA’s argument that the €10m penalty was excessive, the Court noted that EA and its offshoot “have been previously given the opportunity to bring the violation to an end without threat of a remedial sanction. They did not take this opportunity.”

EA has already declared its intention to appeal the ruling, saying “we do not believe that our products and services violate gambling laws in any way.” EA said it remains “open to discussions” with the KSA “to understand and explore solutions to address any concerns.”

Loot boxes have been under attack by gambling regulators around the globe, particularly as studies show the products are the equivalent of a gambling gateway drug. EA’s cause hasn’t been helped by its offhand dismissals of these regulators’ concerns.

EA has shown a willingness to amend its loot box rules in certain markets where regulators took a more emphatic enforcement approach, a pattern that the KSA no doubt factored into its stance.