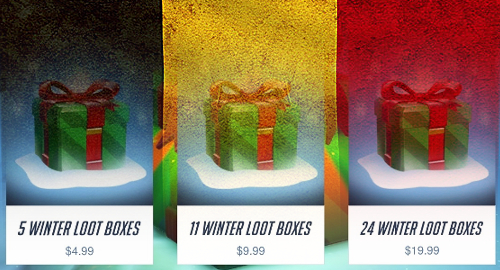 Belgium has become the latest country to whip out the ban-hammer on videogames’ so-called ‘loot boxes’ as an unauthorized form of gambling.

On Wednesday, the Belgian Gaming Commission (BGC) announced that a panel of its judges had examined the use of paid loot boxes in the games Overwatch, Star Wars Battlefront II, FIFA 18 and Counter-Strike: Global Offensive and concluded that the products meet the definition of “games of chance.”

The BGC employs several parameters to determine whether a product meets that ‘game of chance’ definition, including the existence of a game element, whether chance has a role in the game, and whether a bet can lead to profit or loss. The BGC also found fault with loot boxes for offering players an “emotional profit forecast,” whatever that is.

Only three of the videogame titles studied by the BGC were found to be in violation, as EA, the makers of Star Wars Battlefront II, subsequently amended its product to eliminate paid loot boxes. The BGC noted that the loot box “phenomenon is broader than the four games tested,” and thus many other games were potentially in violation.

BGC director Peter Naessens warned that paid loot boxes “are not an innocent part of video games that present themselves as games of skill. Players are seduced and deceived by it and none of the protective measures for gambling are applied.”

Belgium’s Minister of Justice Koen Geens issued a statement saying videogame publishers/developers would need to eliminate paid loot boxes from their products or face criminal charges. Violators could face fines of up to €800k and five years in prison, and these penalties could be doubled in cases involving minors. Geens wants to set up a dialogue between operators and the BGC to determine ways of avoiding future unpleasantness.

Belgium is a notoriously strict jurisdiction when it comes to gambling issues, but in this instance it’s playing catch-up with other regulators who have come out against loot boxes in recent months, including the Netherlands, Sweden and Germany, to name just a few European Union markets.

Last October, the Entertainment Software Rating Board (ESRB) declined to classify loot boxes as gambling due to its view that a loot box always provides something of value to its purchaser, even if it’s not a tangible value that will allow the player to progress more quickly through the game.