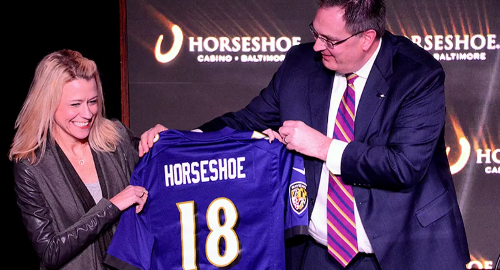 Maryland’s Horseshoe Casino Baltimore has struck a marketing partnership with the National Football League’s Baltimore Ravens, the second such partnership since the league relaxed its gambling advertising rules.

On Friday, Horseshoe Casino Baltimore, a joint venture of Caesars Entertainment and JACK Entertainment, announced an official partnership with the Ravens, the first such deal for both the team and the Caesars casino family. Terms of the ‘multi-year’ deal weren’t disclosed.

The deal will allow the Horseshoe to make ample use of the team’s logos and trademarks at the gaming venue, including the property’s three-level bar, currently known as 14Forty but soon to be rebranded with the Ravens logo. The Shoe will also issue new customer loyalty cards showing off its new NFL links.

The casino’s logo will get ample visibility at the Ravens’ home field, M&T Bank Stadium, and frankly, the Shoe could use all the marketing help it can get. The venue has seen its monthly gaming revenue totals shrink by as much as one-third ever since MGM Resorts’ flashy new National Harbor casino opened two years ago and has consistently been relegated to third place behind MGM and Cordish Cos’ Live! Casino & Hotel.

The official announcement of the deal was made at the casino by Horseshoe GM Erin Chamberlin, who celebrated the union of “two strong Baltimore brands” that each offer “a unique entertainment product with broad and complementary appeal.”

Ravens’ biz-dev VP Kevin Rochlitz joined in the mutual back-slapping, saying the Horseshoe had become “a popular destination” for football fans both before and after Ravens games, and the new partnership “will further enrich the entertainment appeal surrounding” the stadium.

The Ravens-Shoe deal follows six weeks after the Dallas Cowboys inked a similar deal with the Chickasaw Nation’s Winstar World Casino in Thackerville, Oklahoma. That deal came just days after the NFL formally relaxed its longstanding prohibition on its teams having any business ties to casinos or other gaming venues.

The NFL’s change of heart came a few months after the US Supreme Court struck down the federal ban on sports betting. Other major leagues have also been rethinking their gambling links, as evidenced by the National Hockey League’s Vegas Golden Knights’ new official betting partnership with Nevada-licensed sportsbook operator William Hill US.