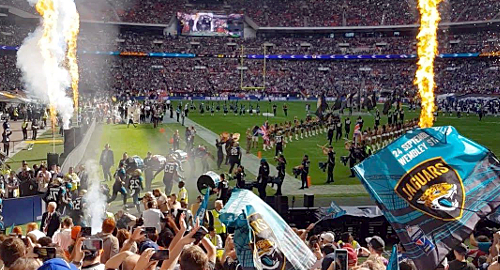 London’s Wembley Stadium will reportedly, have to forego future gambling advertising revenue, while the National Football League has apparently had a change of heart regarding casino advertising.

On Monday, the Times reported that the UK government would prohibit Wembley’s new owner from signing any new gambling sponsors. The government is currently negotiating a potential sale of the iconic venue to Fulham FC owner Shahid Khan, with the outcome to be decided before year’s end.

The government’s position was reportedly spurred by the Football Association’s desire to preserve Wembley’s role as the ‘home of English football.” Last year, the FA scrapped its sponsorship deal with UK bookmaker Ladbrokes following a review of whether such deals were appropriate for a major sports body.

Khan has reportedly offered £600m to acquire Wembley but those bucks won’t buy him the right to sell the stadium’s naming rights until 2057. Khan would also be prohibited from running permanent signage promoting the NFL’s Jacksonville Jaguars, which Khan also owns. Khan reportedly hopes to install the Jags as a semi-permanent fixture of the NFL’s annual London games.

NFL RETHINKS CASINO ADVERTISING BAN
Speaking of the NFL, the league has reportedly had a change of heart regarding its teams’ ability to accept advertising from casino operators. The news, which was first reported by Sports Business Daily, represents a sea change for the US sports world’s most hypocritically gambling-averse entity.

The NFL has yet to publicly confirm the changes, which would reportedly allow teams and casino operators to use each other’s brands and logos, while NFL stadiums would be permitted to enter into naming rights deals.

However, teams couldn’t structure deals so that they enjoy shares of casino revenue and advertising would be restricted to pre- and post-game, so no in-game gambling promotion. Advertising from the casinos’ bookmaking operations will also remain verboten.

The NFL finally broke its official silence on legal sports betting after the US Supreme Court struck down the federal betting ban in May, issuing a call for federal standards for betting operations. Last month, the NFL issued a statement supporting Sen. Orrin Hatch’s proposal to introduce such rules to stem the tide of individual states introducing their own legal betting fiefdoms.