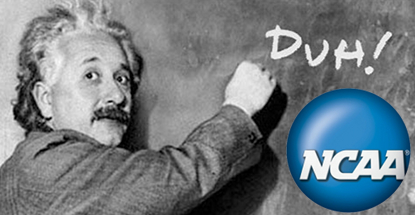 A new study has demonstrated the power that betting lines hold over college football television ratings.

Economics professors Steven Salaga and Scott Tainsky compiled the study, which was recently published in the journal Economic Letters. The professorial pair concluded that TV ratings were higher when the scoring margin moved closer to the point spread late in the game and that viewers kept watching games longer when the total number of points scored remained on the ‘under’ side of an over/under betting line.

The authors claim to have wanted to end speculation as to whether betting drives interest in games, which would poke some major holes in the credibility of the National Collegiate Athletic Association (NCAA), which is one of the most vociferous opponents of betting on college athletics, despite profiting handsomely from the interest that betting provides for its product.

Using Nielsen television ratings for live NCAA broadcasts of Pac-10 (now Pac-12) football games during the 2005-2009 seasons, the authors looked at games in which the point spread was between 14 and 28 points. These samples were further narrowed to games in which the favorite was ahead by at least 10 points going into the fourth quarter.

Salaga told ESPN’s David Purdum that their study’s sample size was admittedly small but they planned to perform further research on a wider swathe of NCAA and National Basketball Association games to see if similar trends were present.