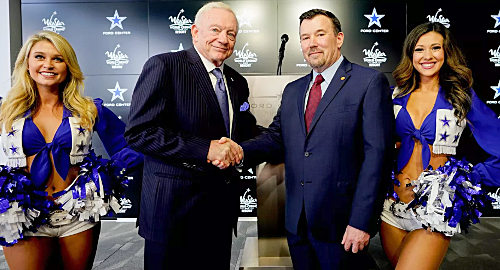 The Dallas Cowboys have inked a sponsorship deal with a tribal casino operator, becoming the first National Football League club to take advantage of the league’s newly relaxed stance on gaming.

On Thursday, Cowboys owner Jerry Jones announced that the Winstar World Casino in Thackerville, Oklahoma was now the team’s official casino partner. The Winstar family of casinos is operated by the Chickasaw Nation, whose governor Bill Anoatubby joined Jones at the podium.

The deal is the first of its kind since the NFL relaxed its prohibition on its teams having any marketing relationships with brick-and-mortar casinos. However, the famously gambling-phobic league continues to prohibit teams from having any connection to casino sportsbooks. Oklahoma has yet to legalize sports betting, despite wagering legislation having been considered in the previous session.

In a press conference on Thursday, Jones (pictured left, alongside Winstar GM Jack Parkinson) said his team took “great pride in aligning themselves with one of the best brands in the world,” and said it was a “privilege to stand shoulder to shoulder as partners” with the Winstar venue.

The Cowboys will reportedly hold a variety of team functions at the casino, although Jones offered no specifics. Thackerville is about 1.5 hours away from Dallas, or, as Jones put it, a mere 20 minutes by ‘JerryCopter.’

The Cowboys have been among the most eager teams to test the league’s gaming boundaries, having embraced daily fantasy sports via the launch of a ‘DraftKings Lounge’ at the team’s home stadium a few years back.

Jones also holds a minority stake in DraftKings – as does New England Patriots owner Bob Kraft – which he’s so far refused to relinquish, despite the company having recently branched out into real-money single-game sports betting.

The Chickasaw tribe recently did some braching out of its own, launching online casino gambling courtesy of a tie-up with online tech provider GAN. The Winstar.com site launched late last year in a number of European regulated online gambling markets.