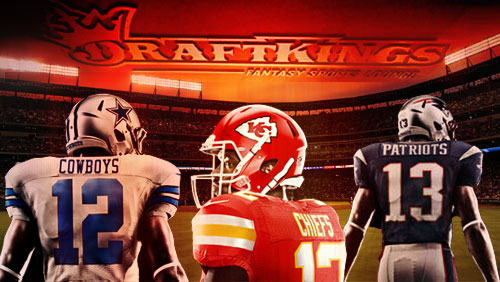 Under a partnership with the Dallas Cowboys, the DraftKings Fantasy Sports Lounge will be located at field-level in AT&T Stadium, giving DraftKings players a chance to cheer their favorite NFL players. The Cowboys will also feature DraftKings branding within the stadium and across the team’s digital, television, and radio networks.

Another sports lounge, The DraftKings Fantasy Sports Zone, will be located at Gillette Stadium—home of the New England Patriots, which will display HDTVs so fans can watch NFL games.

“We love partnering with New England-based companies and are proud to be one of the first to pledge our support of DraftKings,” said Patriots vice president of corporate sponsorship sales Murray Kohl. “Creating a specially-branded space at our stadium showcases our belief in the viability and longevity of daily fantasy sports.”

A similar agreement was also announced with the Kansas City Chiefs’ Arrowhead Stadium, adding to DraftKings’ existing lounges at the Staples Center in Los Angeles—home to the NBA’s Los Angeles Lakers and Los Angeles Clippers, and Madison Square Garden in New York City—home to the NHL’s New York Rangers and the NBA’s New York Knicks.

All of the facilities will open on Sept. 10, as the Steelers face off against the Patriots in the first NFL game of the season.

DraftKings announced the start of its $10 Million Guaranteed Millionaire Maker Fantasy Football Contest that will take place during Week One of the pro football season, giving the players a chance to take home $2m for first prize and $1m for second place.