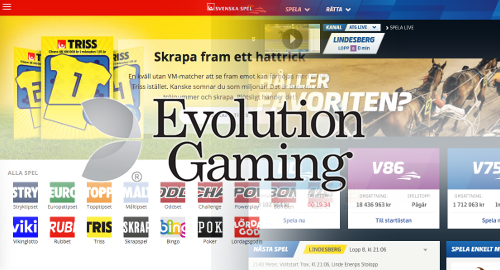 Sweden’s gambling monopolies are frantically improving their offering as they prepare to deal with new competition in a liberalized market.

On Monday, live dealer technology provider Evolution Gaming announced that it had struck a deal to provide live casino services to AB Trav Och Galopp (ATG), Sweden’s current horseracing betting monopoly. The deal will commence on January 1, 2019, the date Sweden has set for the liberalization of its online gambling market.

Sweden’s new gambling regime will see ATG and Svenska Spel enter relatively uncharted territory, although for some time now, both operators have had to compete with internationally licensed online gambling sites that served Swedish punters without the state’s permission.

Svenska Spel, in particular, has long complained that it was competing with one hand tied behind its back, as its offering didn’t include an online casino due to the government’s previous insistence that online casinos were the root of all evil. Svenska Spel has since inked a casino tech deal with SG Digital.

ATG also revealed last month that it was negotiating the addition of a Kambi Group-powered sportsbook to complement its race betting offering.

Last month, Sweden’s government announced that it would conduct a review of the impact that the new regulatory regime was having on its two former monopolies. However, the review’s findings won’t be released until October 31, 2020, which critics say will be too late to reverse any damage caused to the state’s two cash cows.

The deal features an option for a six-year extension at an additional SEK900m, potentially making it the largest of its kind in Swedish history. It’s also notable due to the fact that the sponsorship had been held by Svenska Spel since 1934, but Swedish Elite Football secretary general Mats Enquist said the monopoly “chose not to renew the agreement on our acceptable terms.”