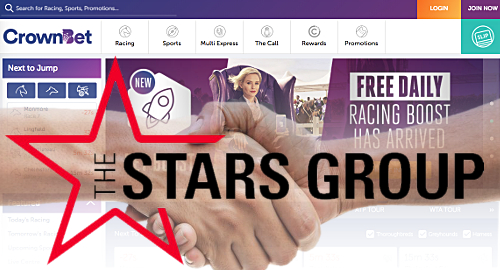 On Tuesday, The Stars Group (TSG) announced that it had acquired a 62% stake in CrownBet Holdings Pty Ltd from Australian casino operator Crown Resorts, which is divesting itself of operations outside its domestic land-based resorts. Crown announced the deal to sell its CrownBet stake last December without disclosing the purchaser’s identity.

CrownBet began life as Betezy/BetEasy, the new project of Matthew Tripp, who founded Aussie online betting operator Sportsbet before selling that business to Paddy Power. Tripp then struck a joint venture deal with Crown and the business was rebranded as CrownBet in 2015.

TSG says Tripp will stay on as CrownBet’s CEO and will continue to operate the business. The deal allows TSG to appoint a majority of the directors on CrownBet’s board.

TSG already has a sports betting brand in Betstars, and it’s unclear how soon CrownBet will be rebranded under the Betstars banner. Betstars appointed former William Hill Online managing director Andrew Lee as its new MD last month, with a mandate to prepare the site for “future geographic expansion.”

PokerStars withdrew from Australia last August, following passage of the amended Interactive Gambling Act, which banned all online gambling verticals other than sports and race betting. As such, BetStars won’t be able to cross-sell bettors on its poker and casino offerings, at least, unless a push by some Aussie politicians to legalize poker proves to be more than a PR stunt.

Aussie-licensed operators are also dealing with new restrictions on credit wagering, a ban on in-play sports wagers and the imposition of state-level point of consumption taxes. The tightening regulatory noose convinced UK bookmakers William Hill to place their Aussie division under review and take a £238m impairment on the division last week.